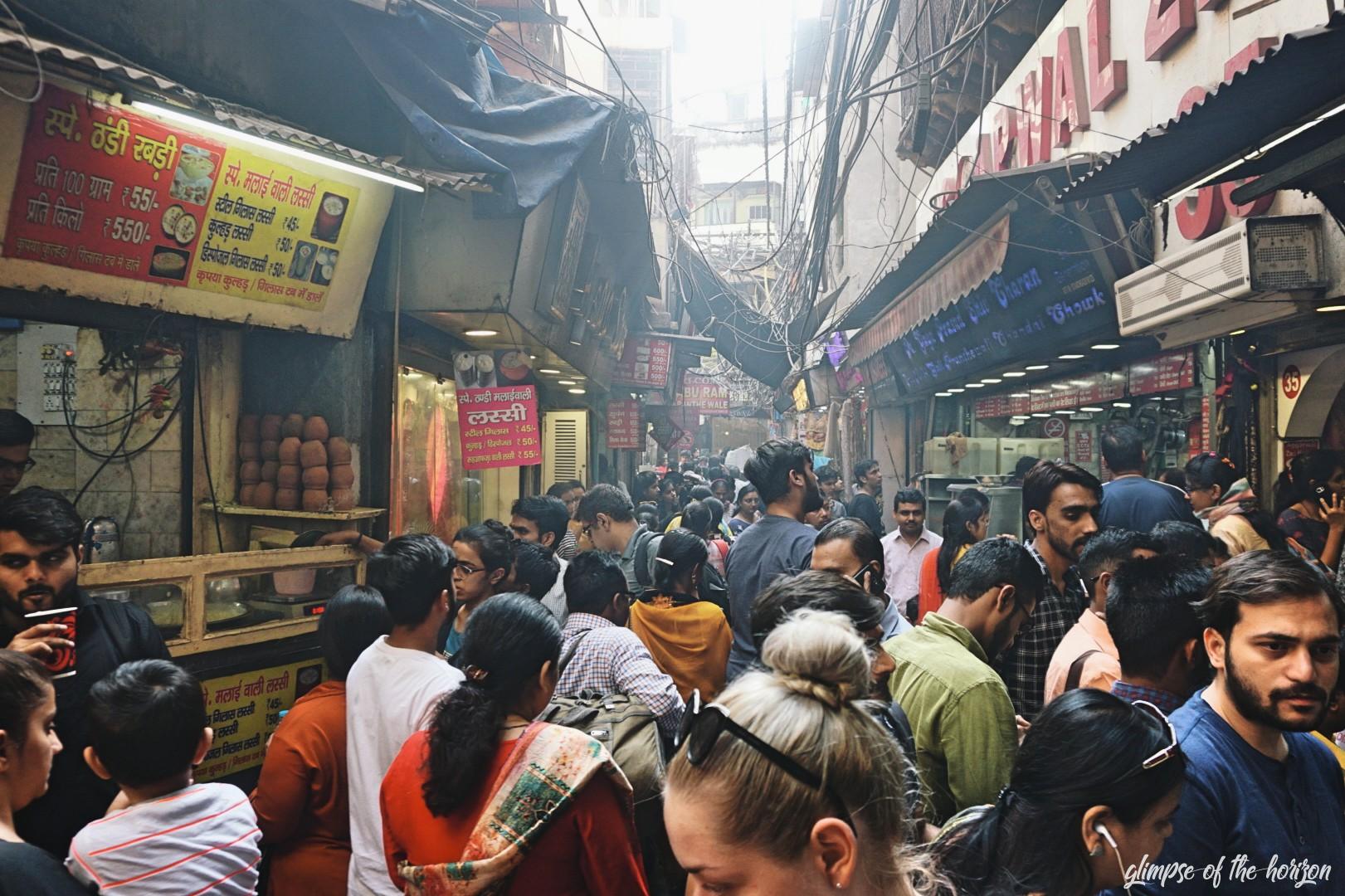 It was a deep night when we arrived at the airport of New Delhi. Our memories of the beautiful Shiraz were still fresh. We knew that India would be different from Iran. But what does that mean?

How big is New Delhi? Already there the opinions differ. The official number is 26 million people. If you believe the Indians who brought us closer to their city here, the unofficial size of the city is over 34 million people. It’s unimaginable, since Berlin sometimes seems to us to be already unmanageably large when we visit it.

New Delhi has a lot to discover. We opened the city map and were overwhelmed. Where to start here? We decided to dare our start in India via the culinary track. Two Indians led us to the old town of New Delhi. The journey began in the modern metro, which was as good as in Tehran.

Arriving at our destination we climbed the stairs of the Metro. It was perhaps the biggest and most surprising contrast we have ever experienced on our travels. The modern and clean metro below and the hectic and chaotic old town of New Delhi above. All eyes were on us. 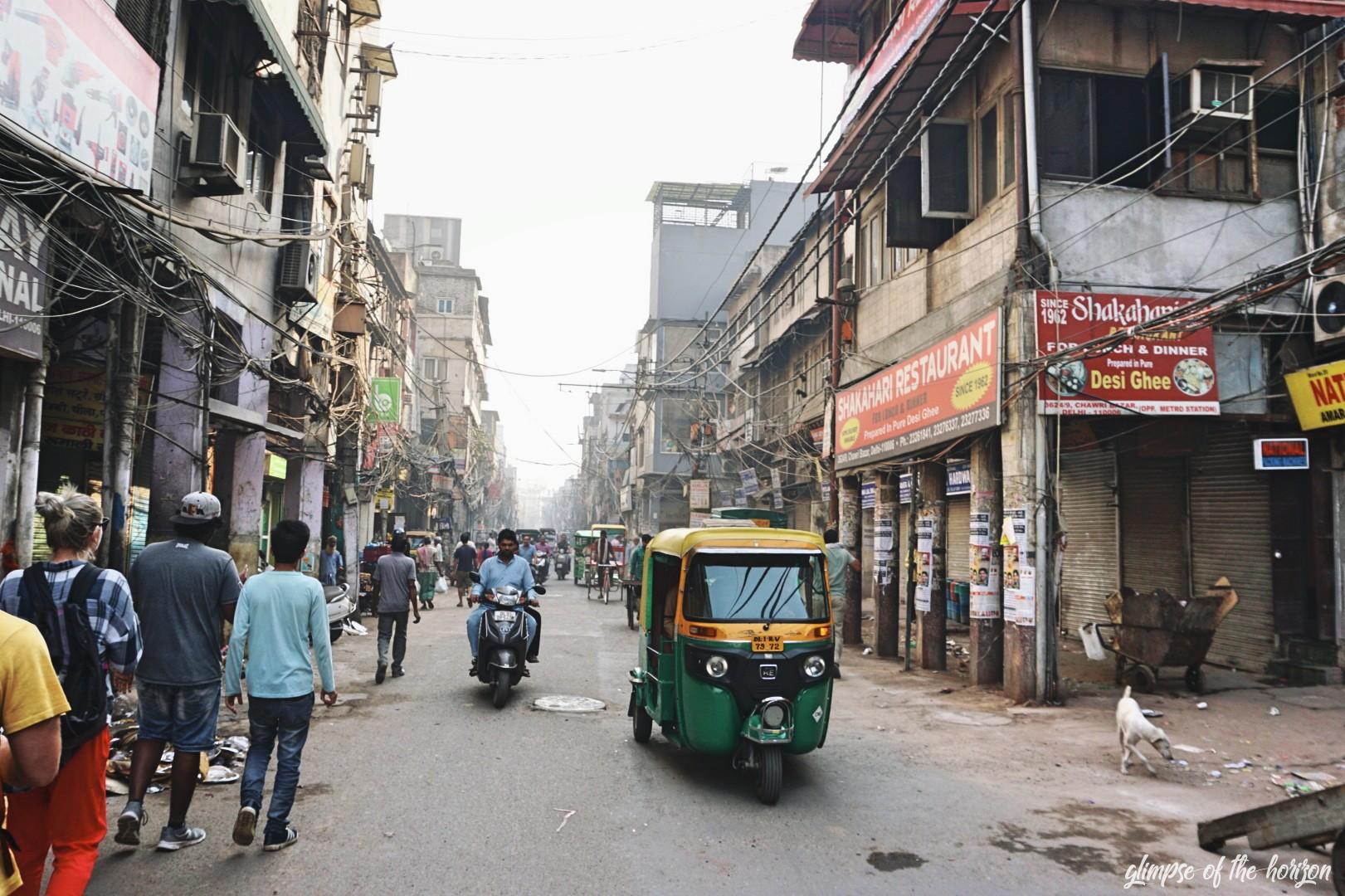 It wasn’t an unpleasant moment, but an unexpected one. We did not see an obvious tourist in the area. But a lot of garbage on the streets. From above there were countless cables hanging from the roofs and balconies of the houses. And an unbelievable horn concert, not even known from cities like Jakarta or Mexico City, was heard from the alleys.

We made our way through the narrow streets of the old town. Everything was crowded here. People, tuktuks, scooters and animals. Sometimes cows came towards us, sometimes goats ate on stalks in the middle of the alley. Sack trucks drove us into the heels. And always this bright horn. 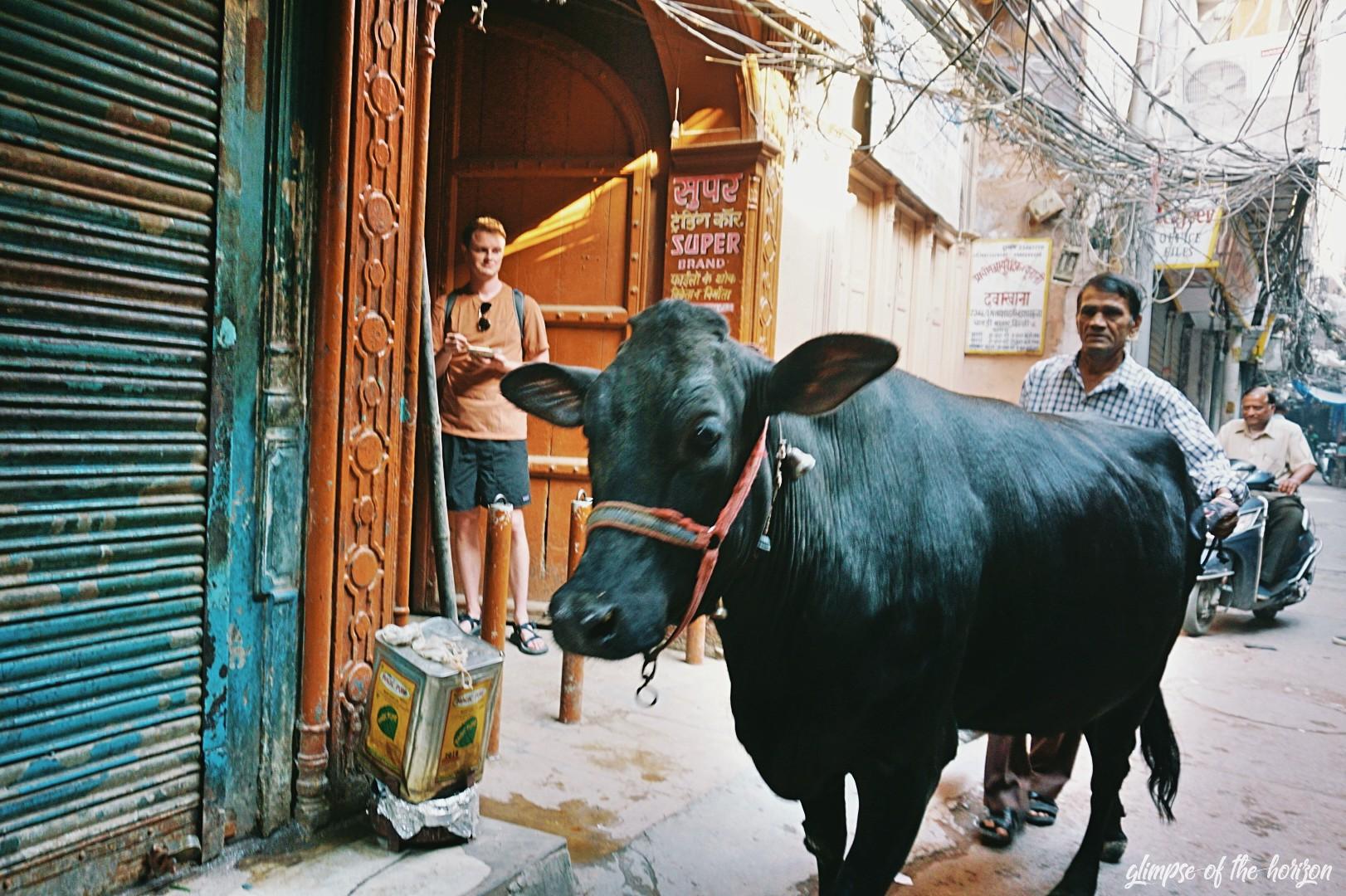 Curry in the morning, at noon and in the evening

We ate at different stands along the alleys. But we only did this because our Indian guides knew those stand owners. Way too often we had heard of stomach problems from friends and other travellers. The Indian cuisine is anyway a challenge for our European stomachs because of its spicyness. So hygiene is even more important.

The food was really fantastic. Various curries, breads and desserts gave us a great insight into the actual food of the streets of New Delhi’s old town. The plus point: The ingredients of the food were local. Minus point: plastic, plastic, plastic. Even sitting in restaurants everything was on plastic. Used plates and cups were thrown into the street corners. 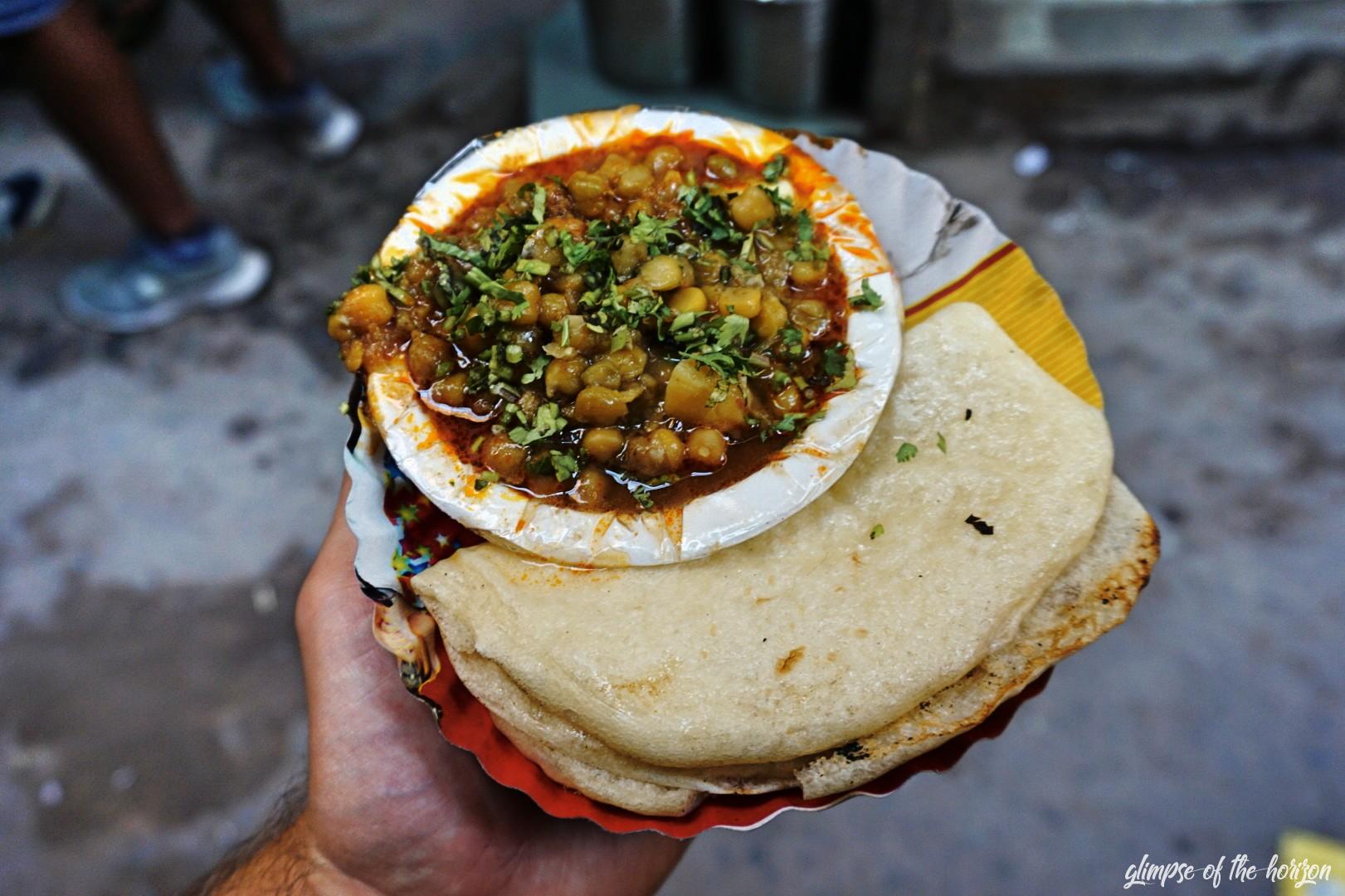 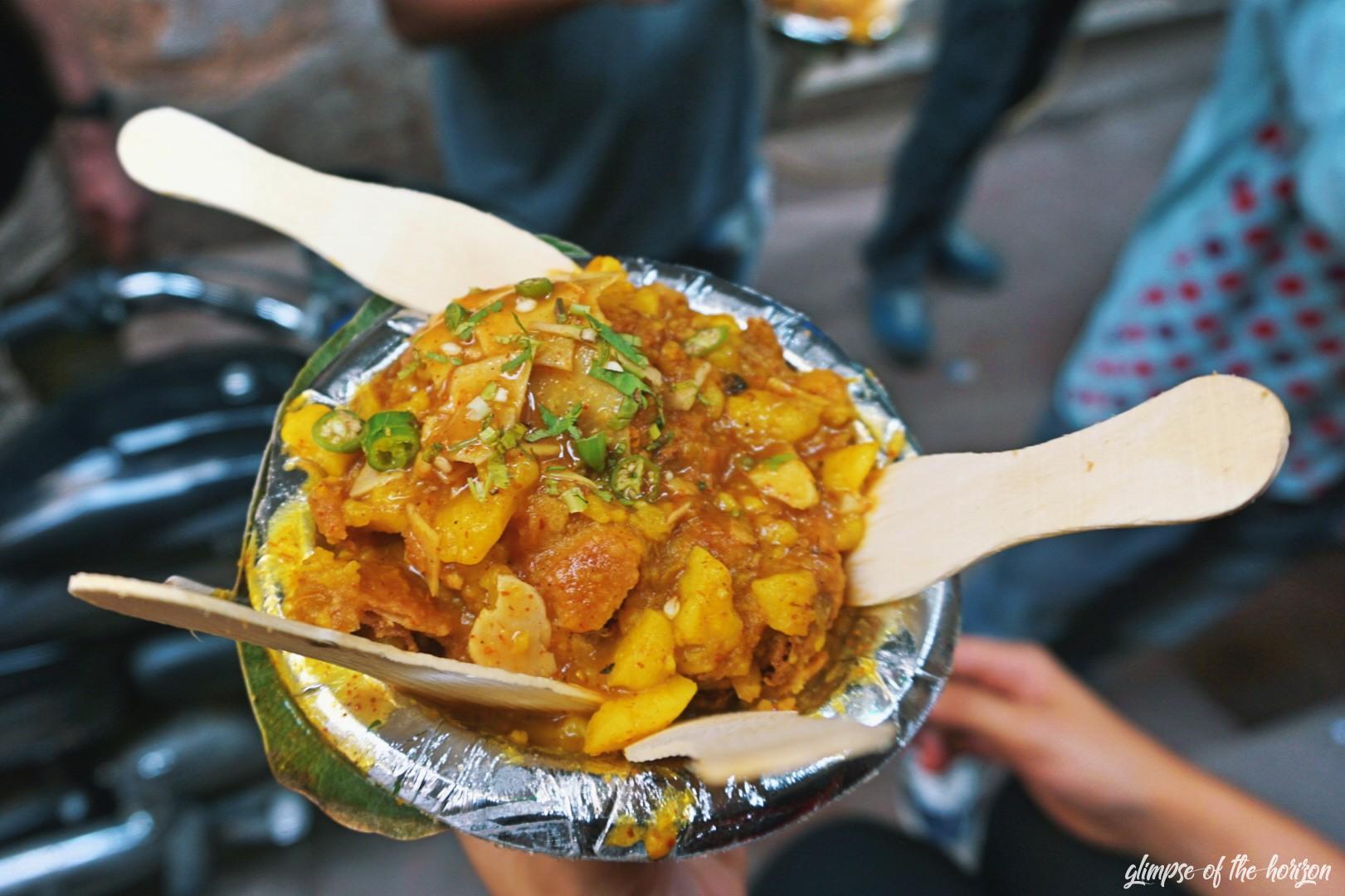 We were assured that the stand owners would clean it up and dispose of it in the evening. Actually, we would like to believe. And we were also told credibly that about 4 years ago there was almost twice as much rubbish on the streets – but still small doubts remained when looking over the alleys of the city.

We were in the middle of the hustle and bustle of New Delhi. Meanwhile the markets of the city woke up and it became fuller. When we arrived in the old town we didn’t think we could do that. But here we stood now. In the middle of the crowd. The alleys hardly wider than two meters. Once we stood at the same spot for five minutes without exaggeration. Nothing moved. 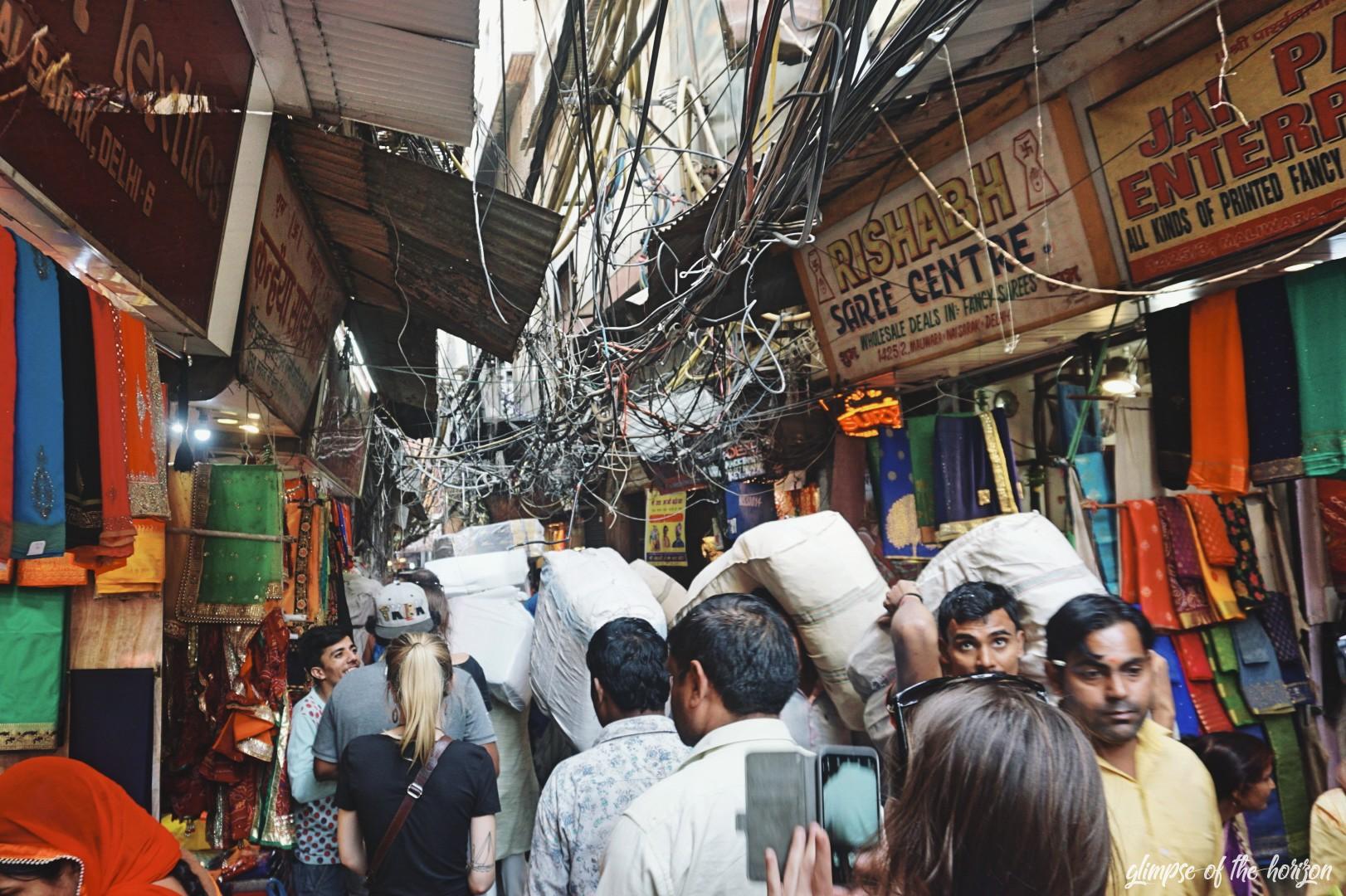 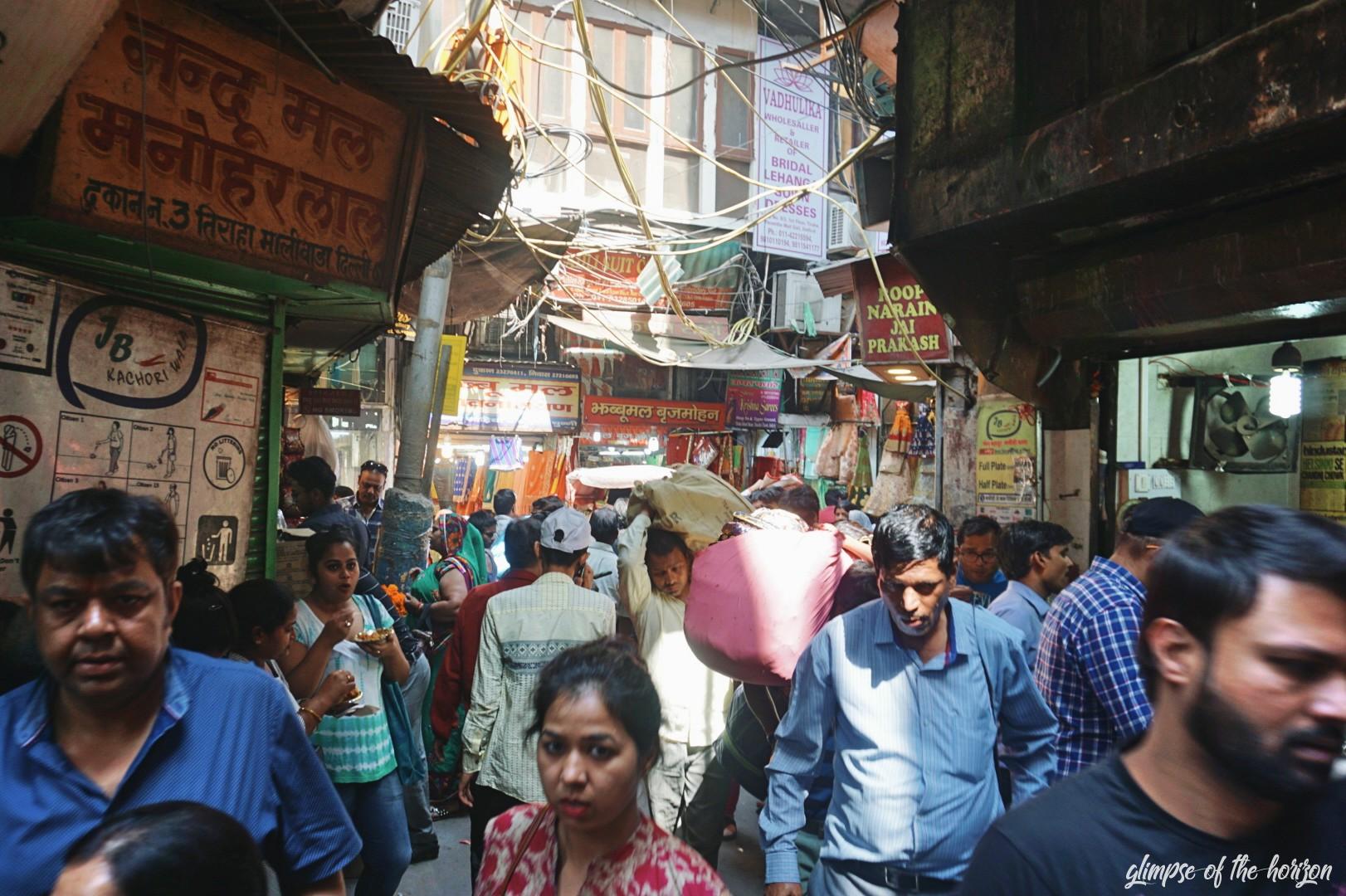 Many Indians with scooters thought it was a fantastic idea to drive through here. Since scooters are more important than people, the way was simply cleared. Deafening noise. Sometimes some scooters pushed you away. People with claustrophy should avoid these lanes. 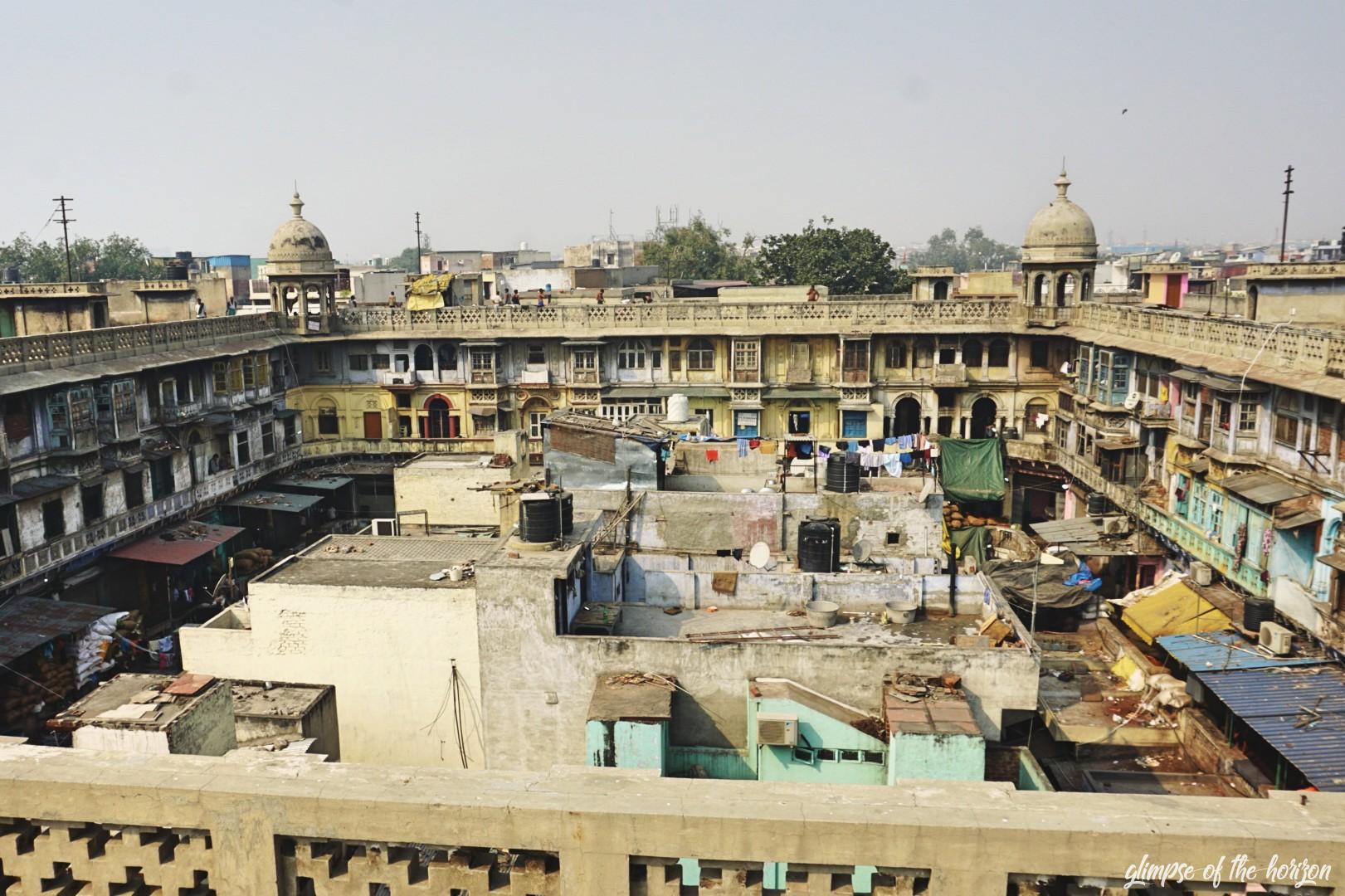 When we arrived at the city’s herb market, new smells were added. Cumin, turmeric and aniseed were at home here. Monkeys were running around on the railings. What an unreal scenario. The selection of spices and especially of spice mixtures was phenomenal. And also the chai you could drink here was really delicious. 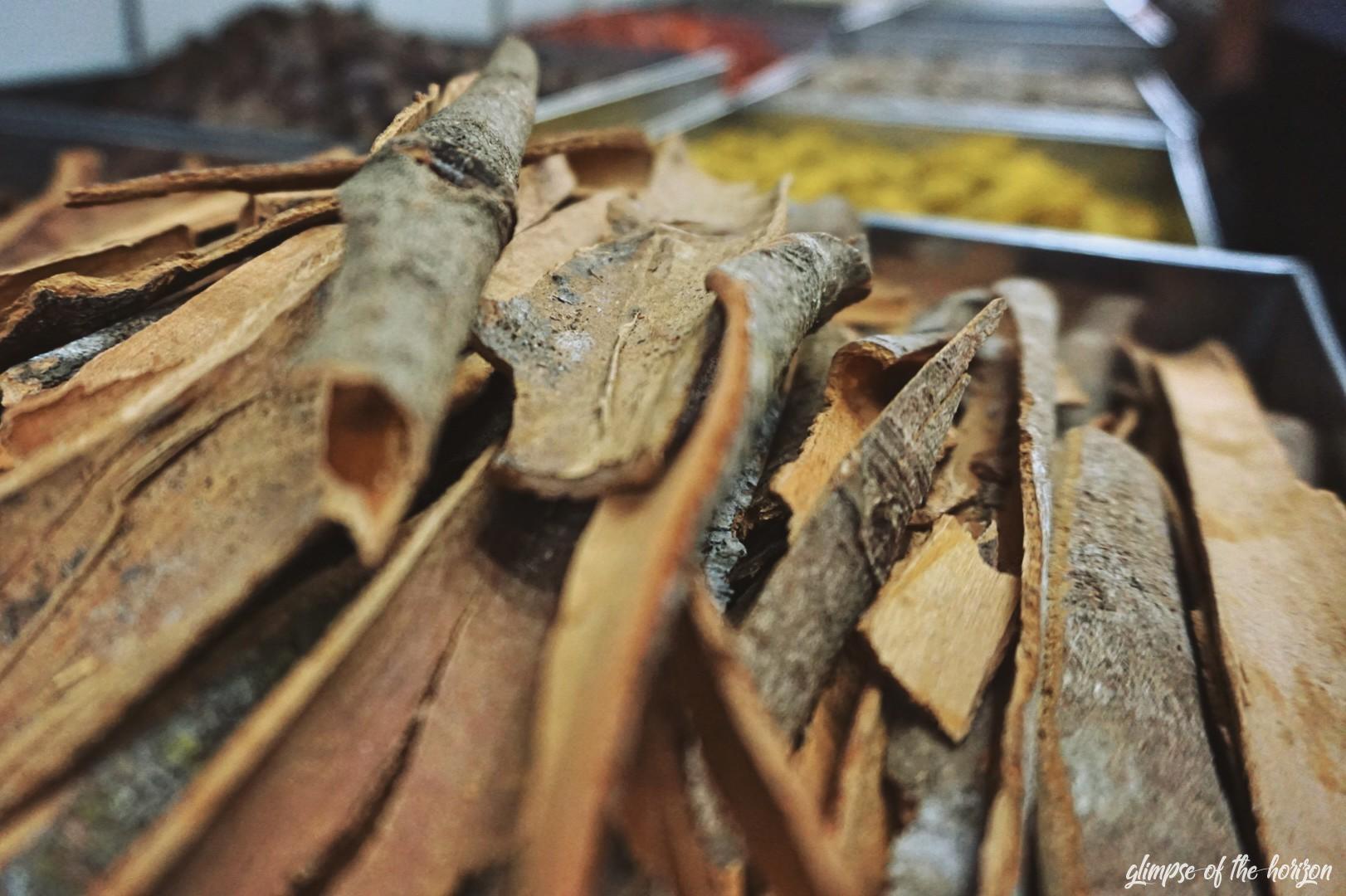 But first we had enough hustle and bustle. This city still had a lot to offer. A lot to see, smell and taste. When our time in New Delhi was coming to an end, we wanted to experience an unusual and unplanned highlight. A traveller in the hostel told us enthusiastically about it.

He was at the Bollywood Theater the previous evening and would join us to see it again. We didn’t think long and so we found ourselves a little later with ten other hostel guests in front of a huge artificial palace. In a moment we would see the most frequently seen and longest running Bollywood play. 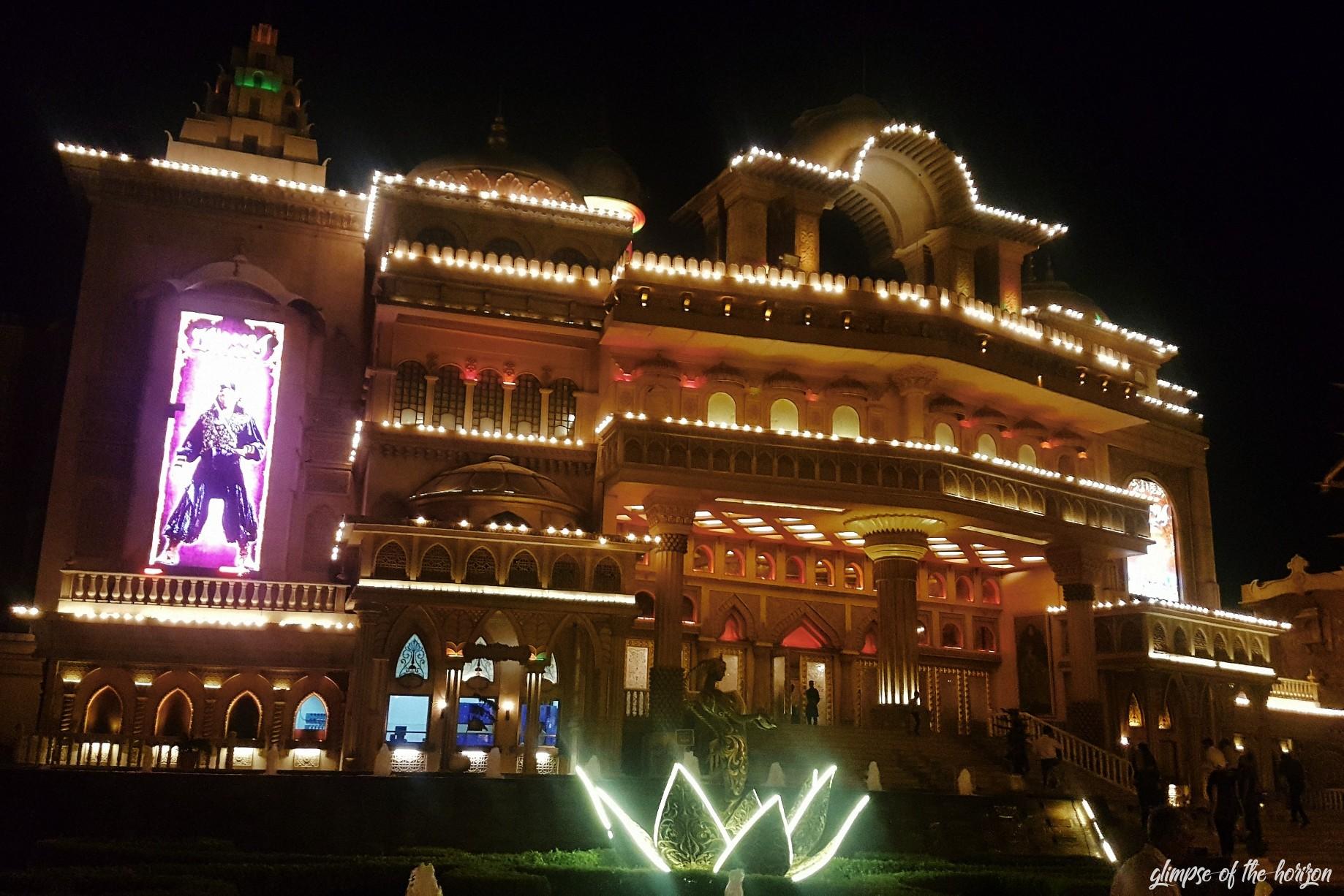 It was fantastic. A dancing mixture of Aladdin and Lion King meets the backdrop of Dubai in the midst of the feeling of a cinema crossing with an amusement park. All the actors spoke Hindi, but that didn’t hurt the cause. Even the bouncers laughed and danced along.

An unusual and beautiful conclusion before we continued. The next day we drove on to Agra to the Taj Mahal.

What New Delhi has left in our memory: