The capital of Iran presented itself in all its splendour: Tehran is lively, open-hearted and absolutely suitable as an oriental entry drug. The city itself seems incredibly confusing and retains this image as soon as you get lost in the city’s bazaars. But this is only half the truth, because in the midst of this confusion, Tehran is actually calm in itself. An exciting contrast. 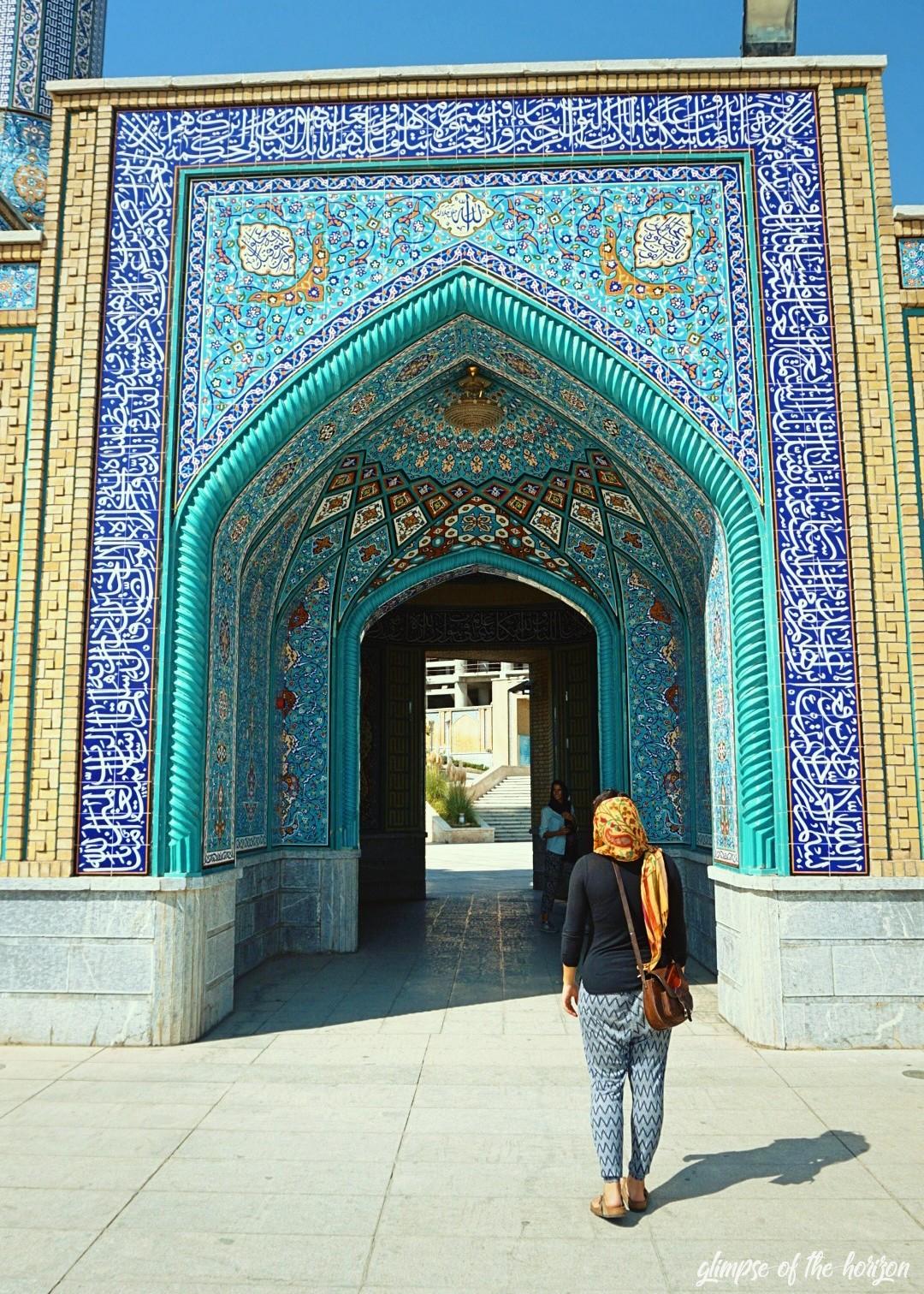 “Tehran? But that’s an unusual start for your trip around the world,” they often said when we talked about our trip. There is a stigma on Iran. Which one exactly could we not find out. Are you afraid of Iran? Is it all too unknown? We never felt fear here for a second – on the contrary: Everyone is immensely open to you, the police presence is very limited and the Iranians are happy about tourists at all.

Journey to the unknown

But the second thought is true: Tehran is unknown. Not much gets outside. That was also a reason why we wanted to start our journey in this city: We wanted to start with a loud bang. And we succeeded. Hardly any shop uses familiar characters. Many Iranians have no knowledge of English. And women are encouraged to cover head and neck loosely with a scarf or cloth. 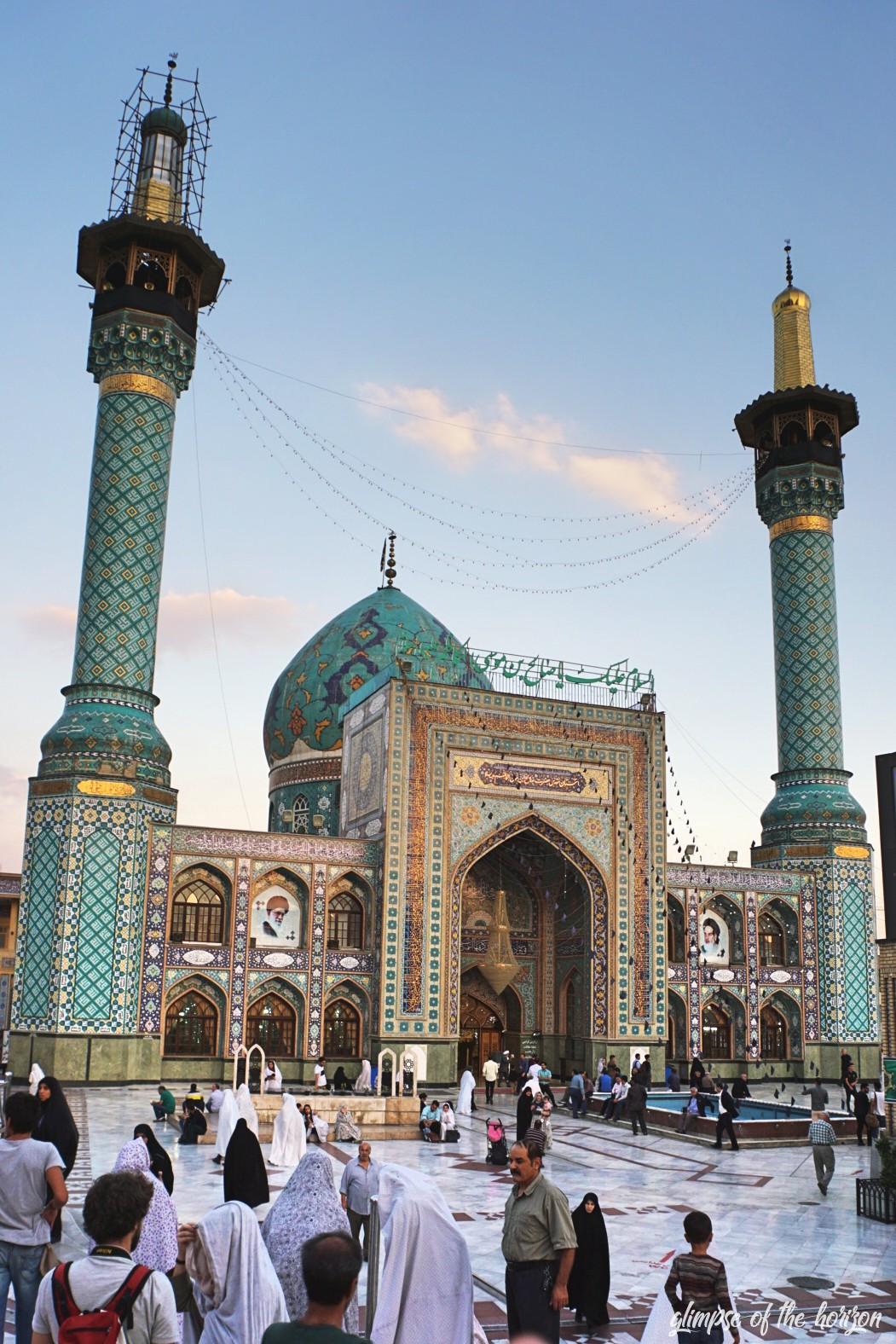 This already begins in the plane, where shortly after landing all the women pull their cloths out of their pockets to cover themselves. In some mosques of the city it is also necessary for women to put on a full body veil. These are distributed at a separate entrance. In principle, men have it easier – but they always have to wear long trousers. Always over 30 degrees.

During the first ride on the streets of Tehran it was immediately noticeable that there are not too many rules in road traffic. As a real Persian you only feel if you have the courage to cross even multi-lane highways and to make the cars stop. 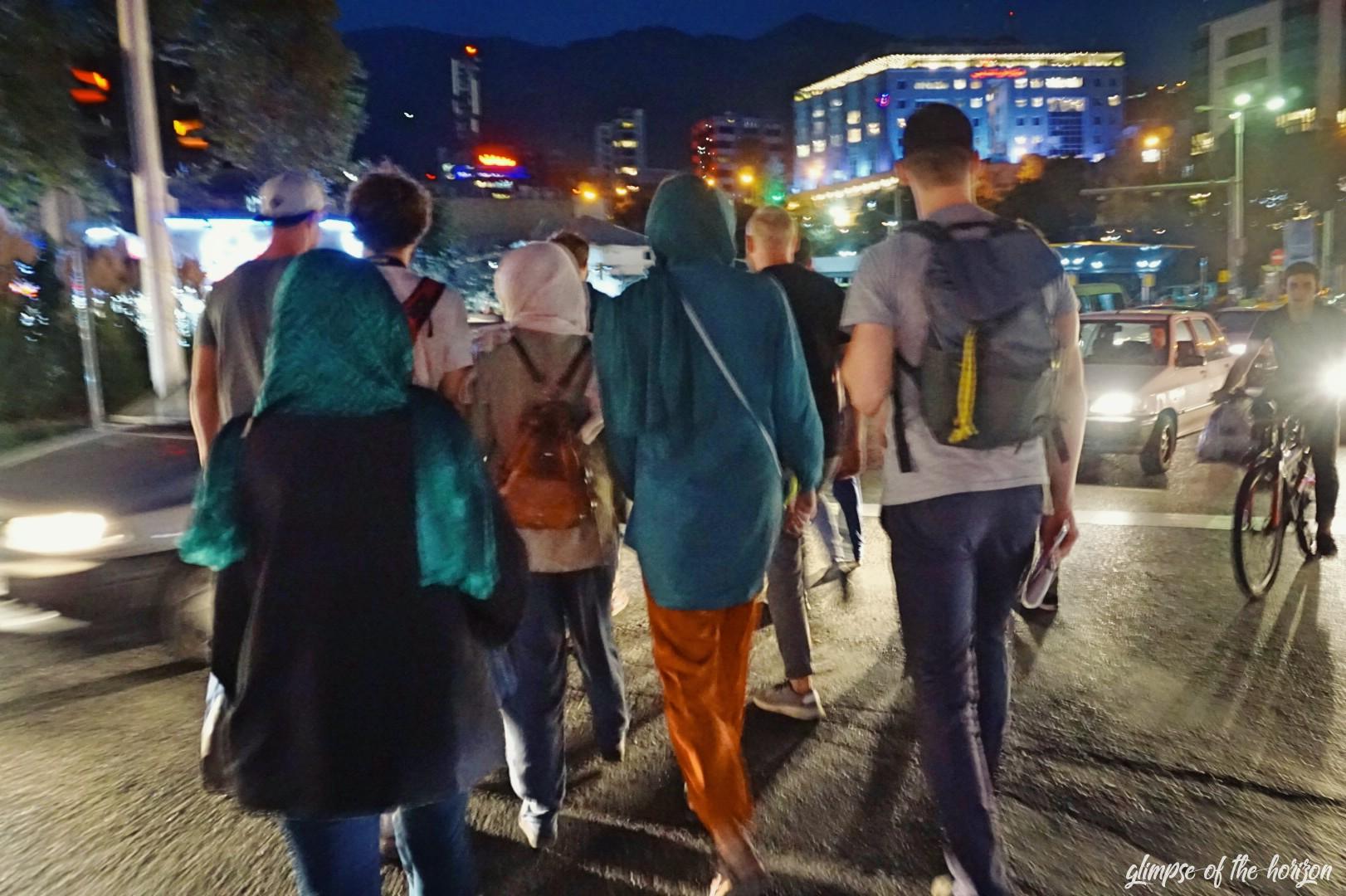 Speaking of roads: Tehran definitely has a problem with air pollution. We felt reminded of cities like Jakarta or Lima: In the city centre every breath was associated with a good load of petrol. That was less beautiful. 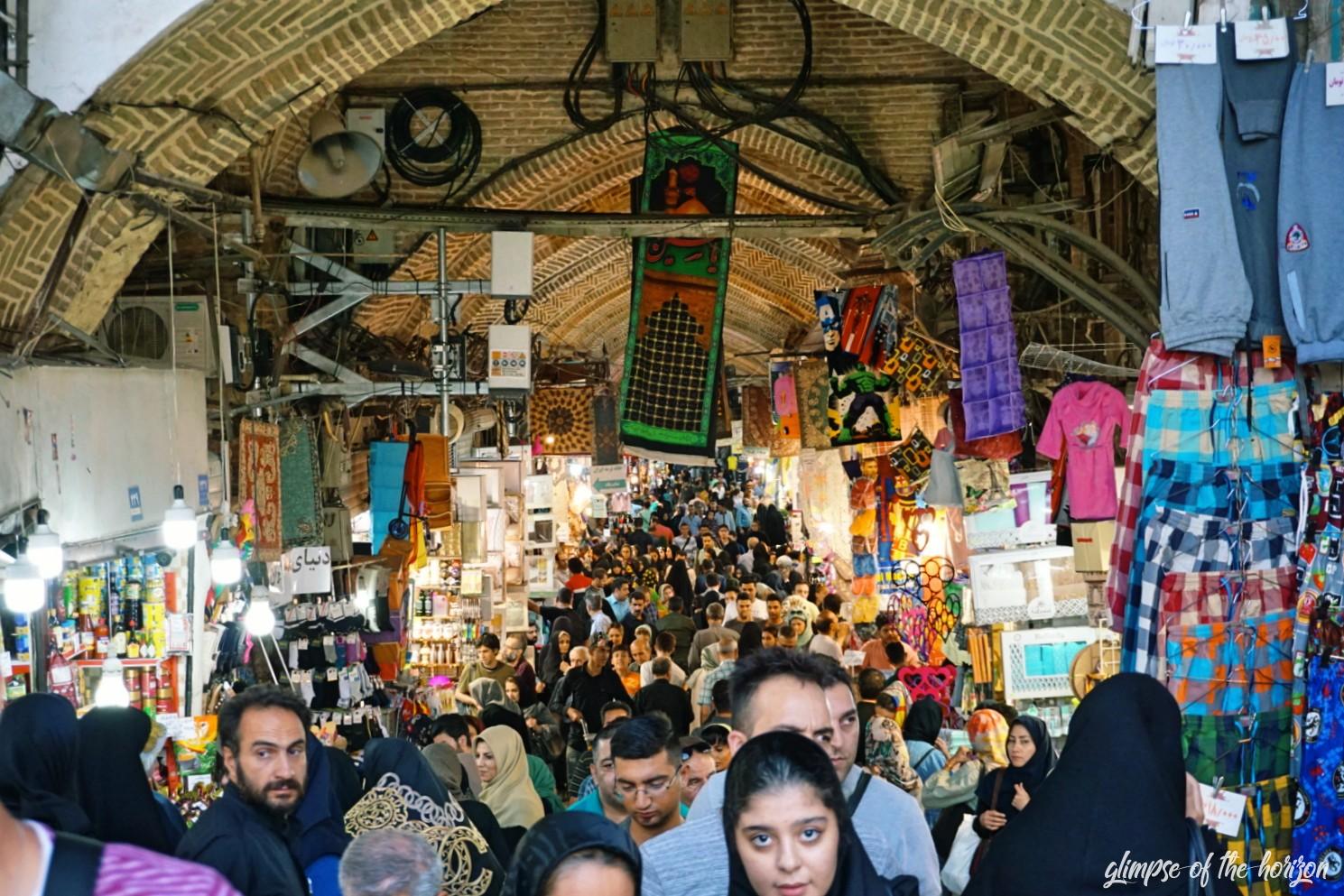 More beautiful were the highlights with which the Iranian capital can drive up: Big colourful mosques, a well developed metro system and colourful loud markets. A few times we got lost in the narrow alleys of the bazaars, but that wasn’t bad: It was great to see the many colours of fruits, metals and woods that were sold here. 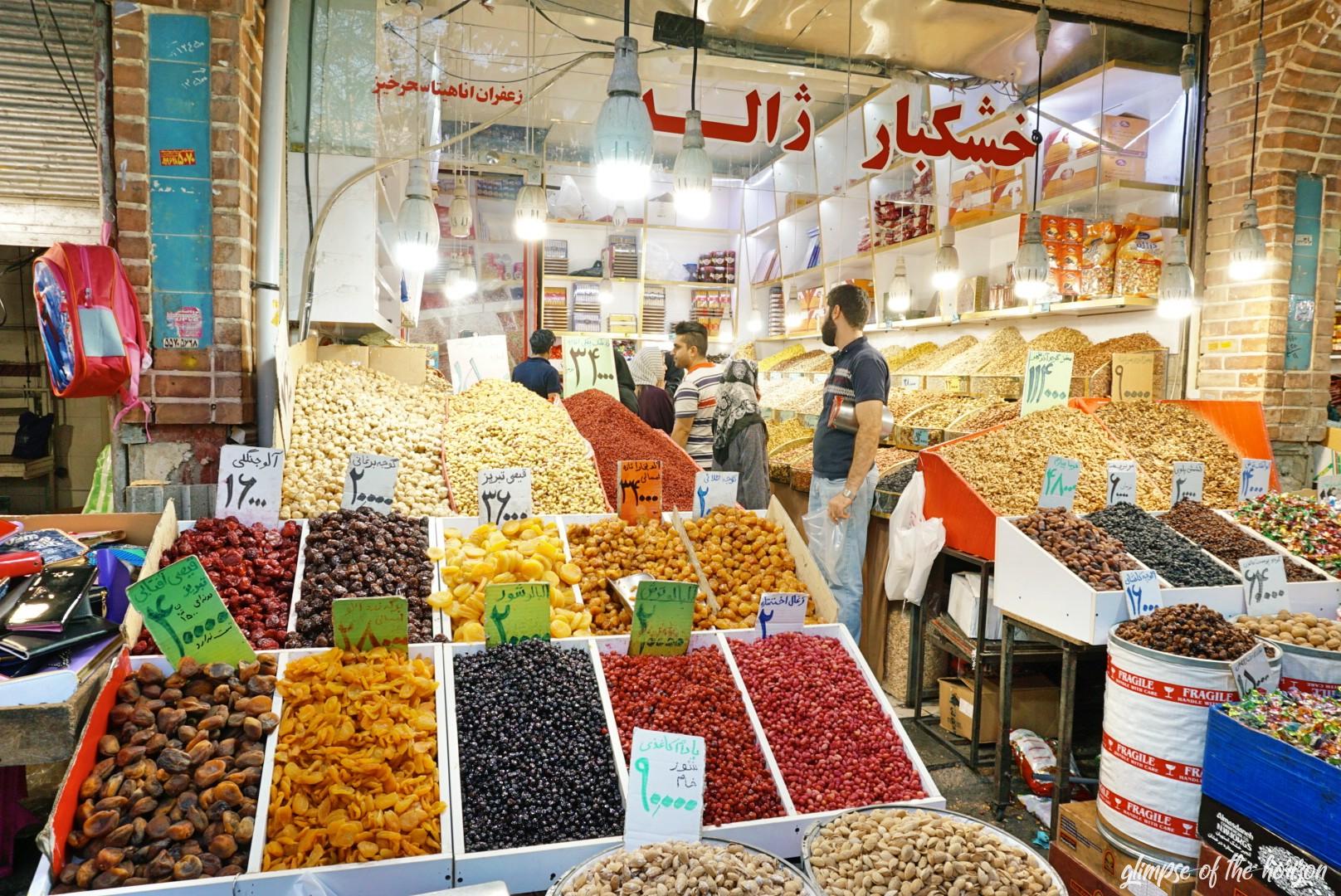 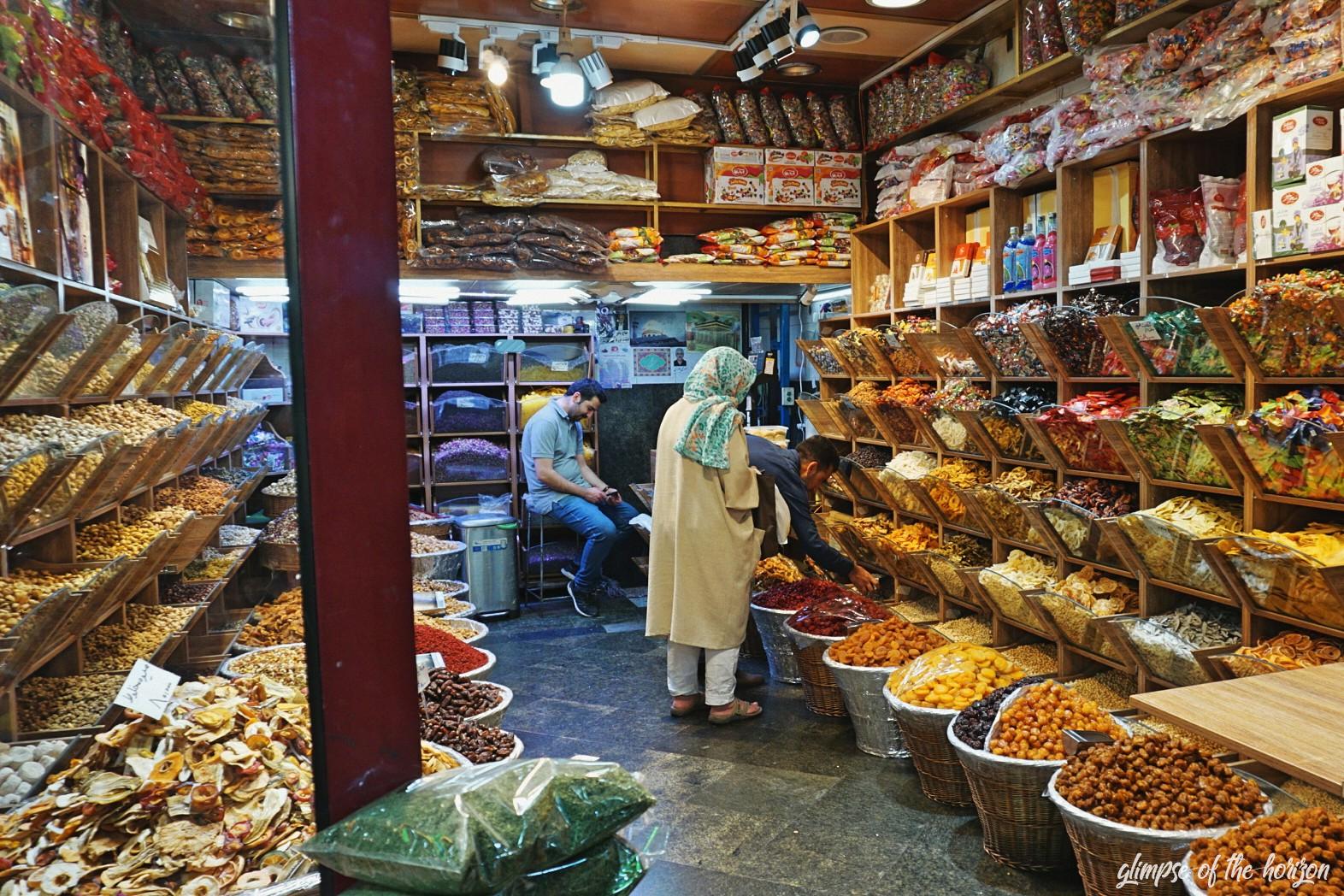 Tehran people are particularly fond of pomegranates. No alley without the red balls that are sliced, pressed and eaten everywhere. Anyone who knows pomegranates knows how difficult it is to get the seeds out. We were all the more surprised that a cup full of seeds only cost 25 euro cents. And the taste was heavenly. 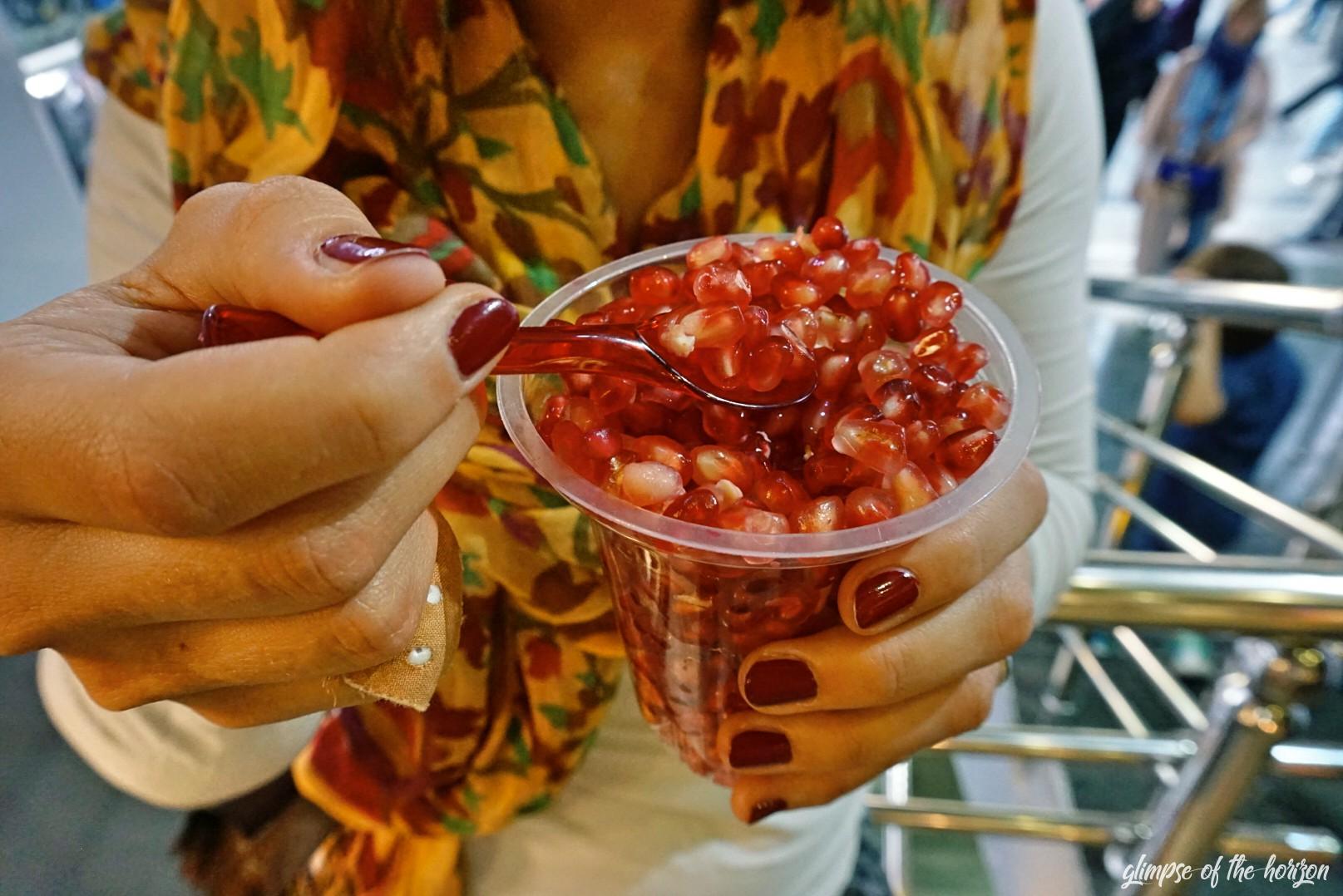 Generally money is an interesting topic in Iran: To put it in a nutshell, you can’t do much with your usual credit cards here, because ATMs don’t accept them. There are therefore two ways to get money. First: You get an Iranian credit card. Secondly, you take cash with you and exchange it locally. 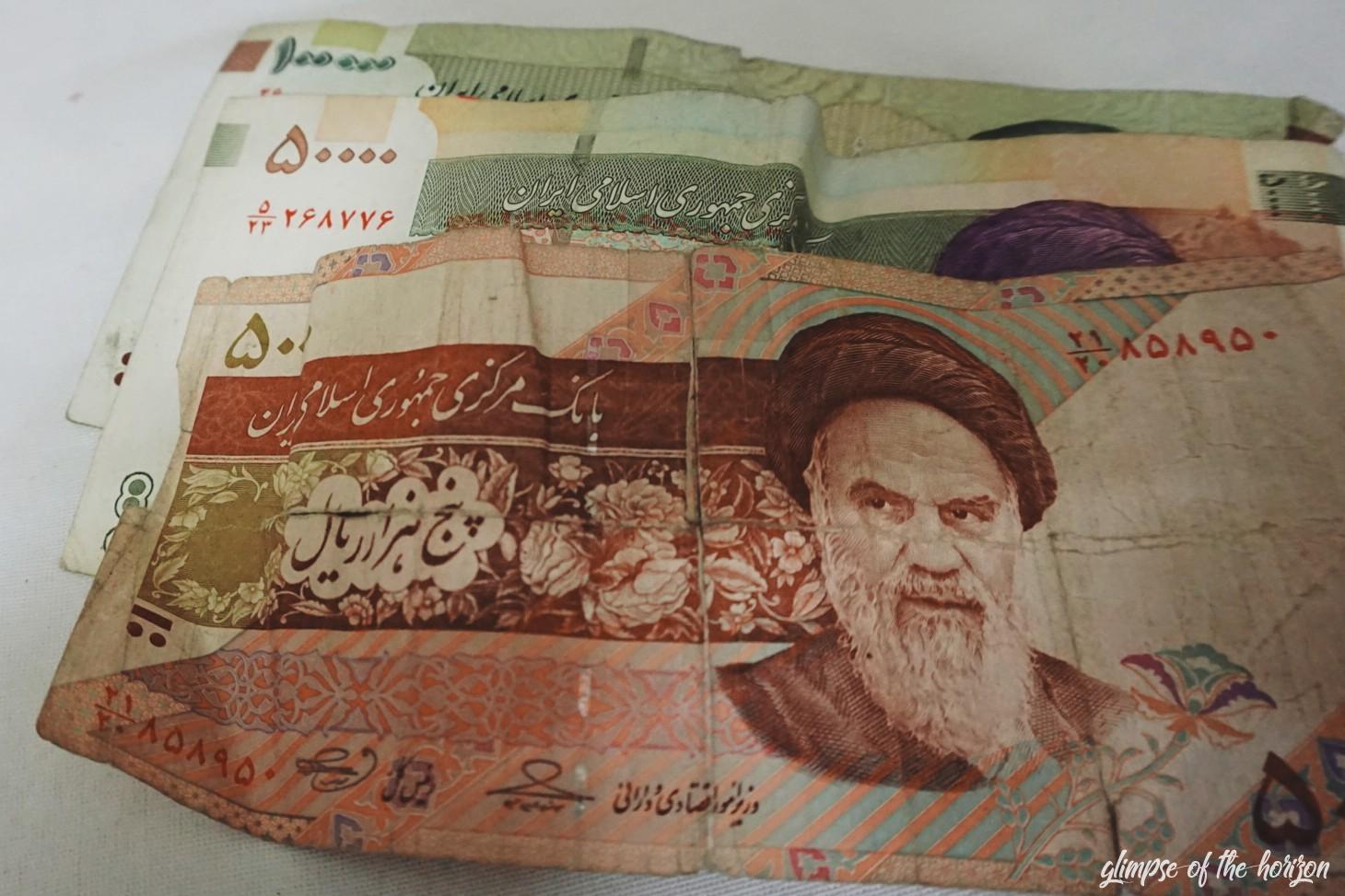 We decided to go the second way and took dollars with us, which we needed anyway on the next trip. First realization: The euro is much more common in Tehran than the dollar. This doesn’t come as a surprise on closer inspection, as the few tourists in the country come mainly from Europe. 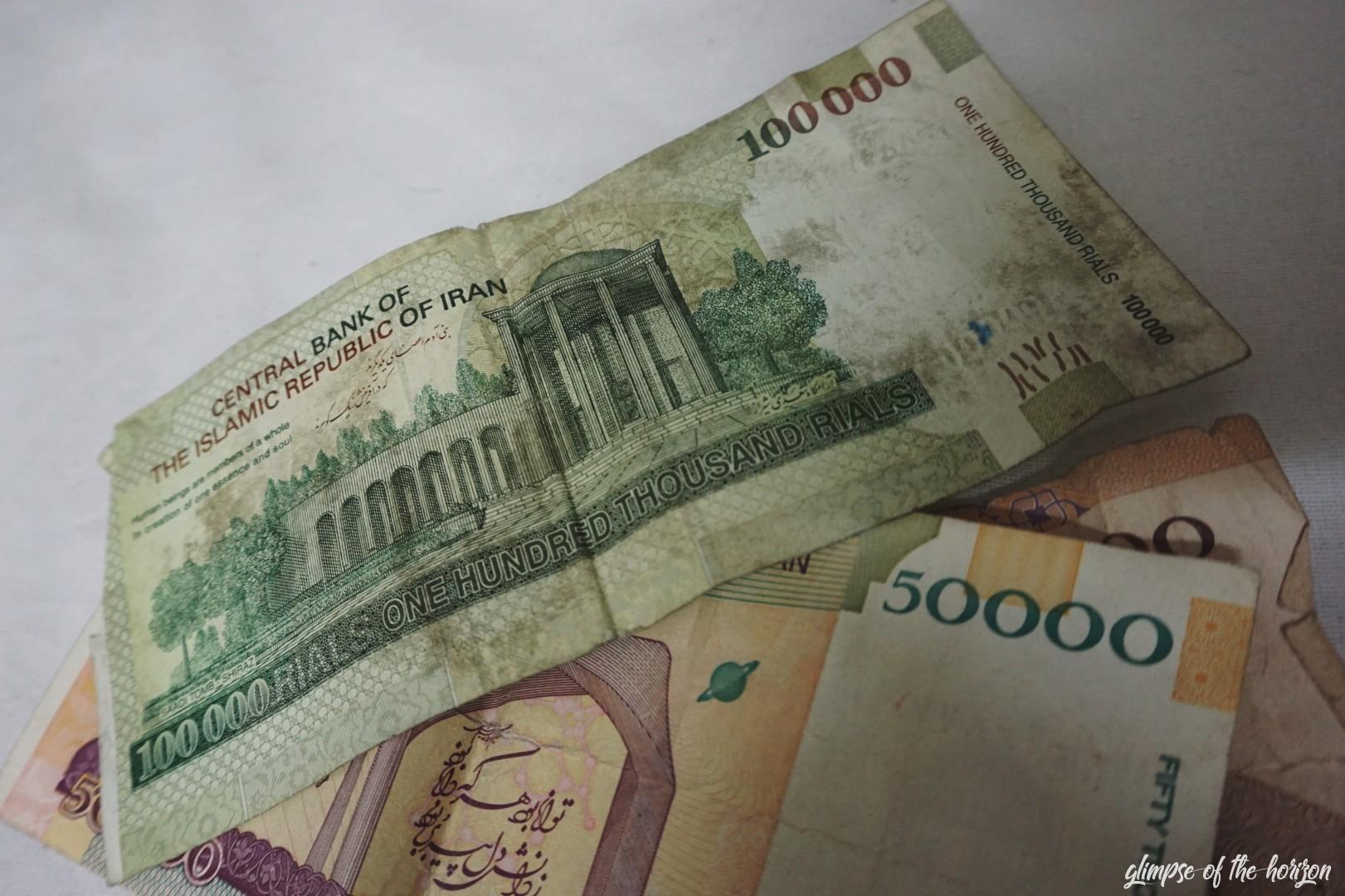 Second finding: The Iranians speak of Toman when they act, but pay in rials. For example, the pomegranate cup cost 5,000 Toman. But you pay with a 50,000 note that says “Rial” on it. In everyday language, a zero at the end is simply deleted. That doesn’t sound complicated, but it is definitely a hurdle when it comes to conversion.

Above all because of the third insight: exchange rates are changing rapidly! Sometimes they go uphill and downhill every hour. Two months ago, acquaintances of ours were here and got 100,000 rials for one euro. On the day of our arrival we received 195,000 rials. Two days later we received 158,000 Rials in the morning and 173,000 Rials in the evening.

The city is loud and lively, so people come to rest in the evening. The tea flows in streams, the golden lamps and candles light up the restaurants and hotels. Many tourists can’t be seen on the streets – even in our hostel there were some on the way, but Tehran is far from being a tourist magnet. 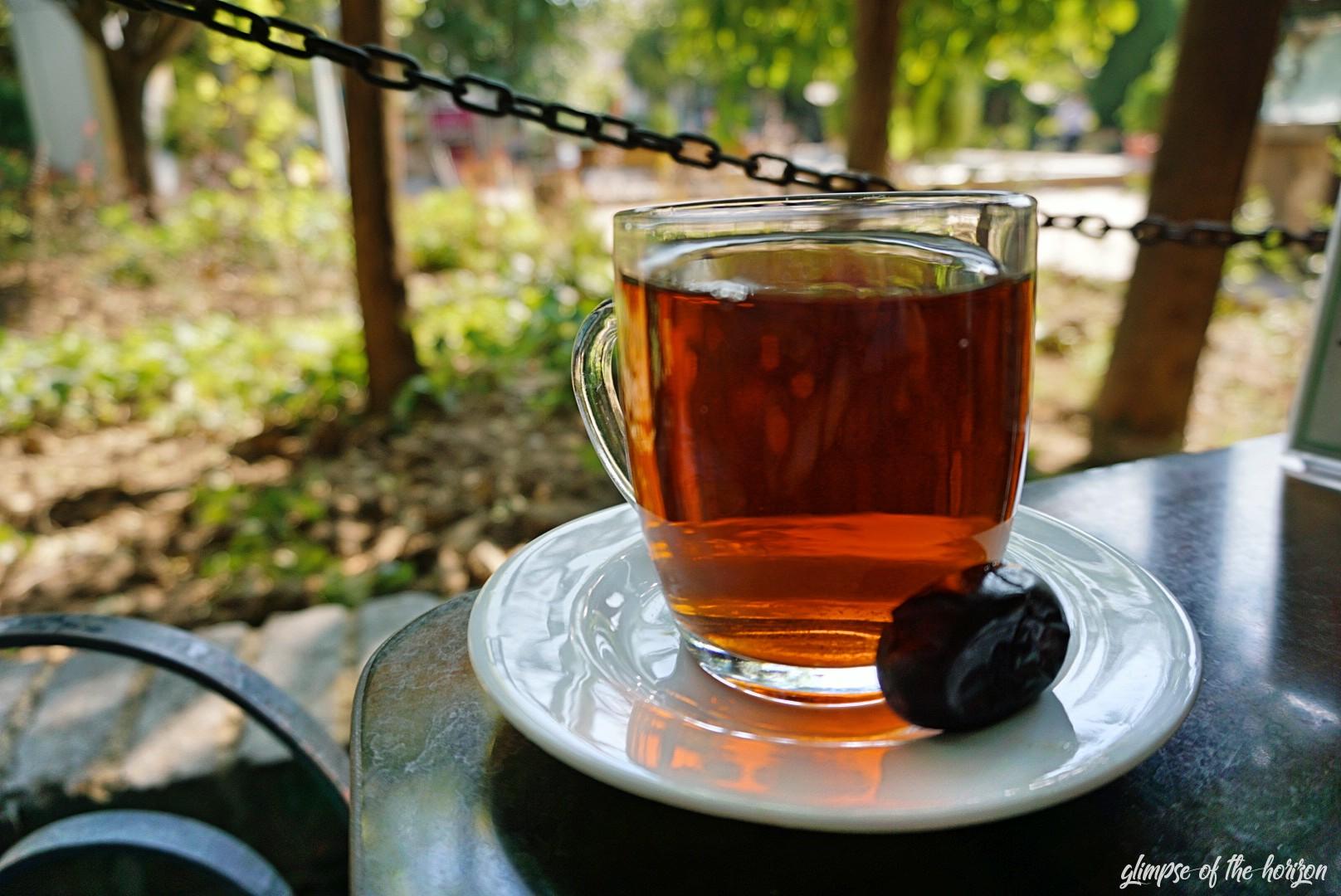 The Iranians are happy about every tourist and the tea is always on the house. At night it is quiet in our corner of Tehran. As quiet as we knew it from no other capital so far. In this way the Tehrans draw their strength for the busy liveliness during the day. 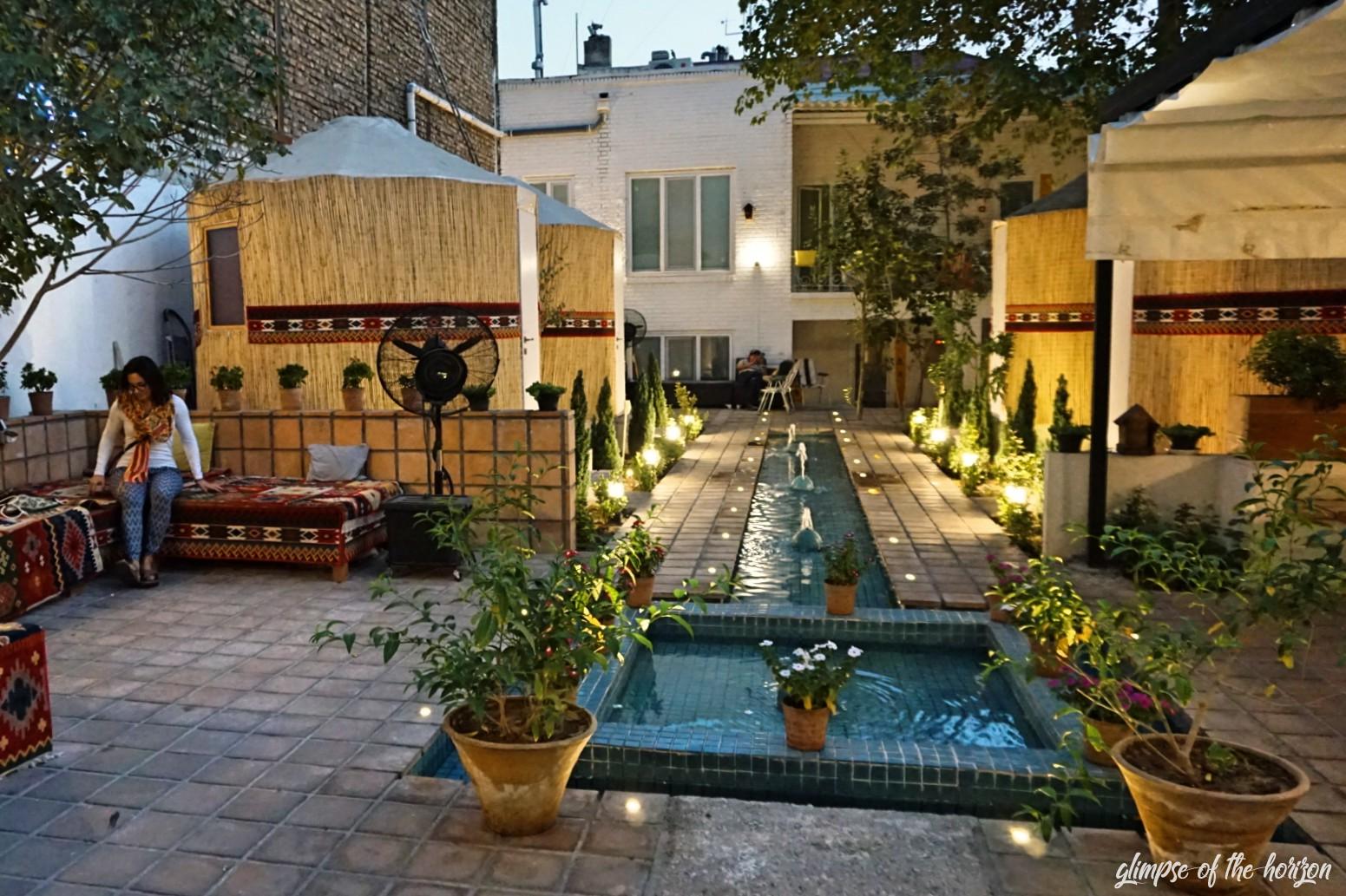 These were the first three days of our six-month trip around the world. For us it goes now further into the south of Iran. On the way to beautiful Isfahan we pass other cities and villages where we want to get to know more Iranian culture.