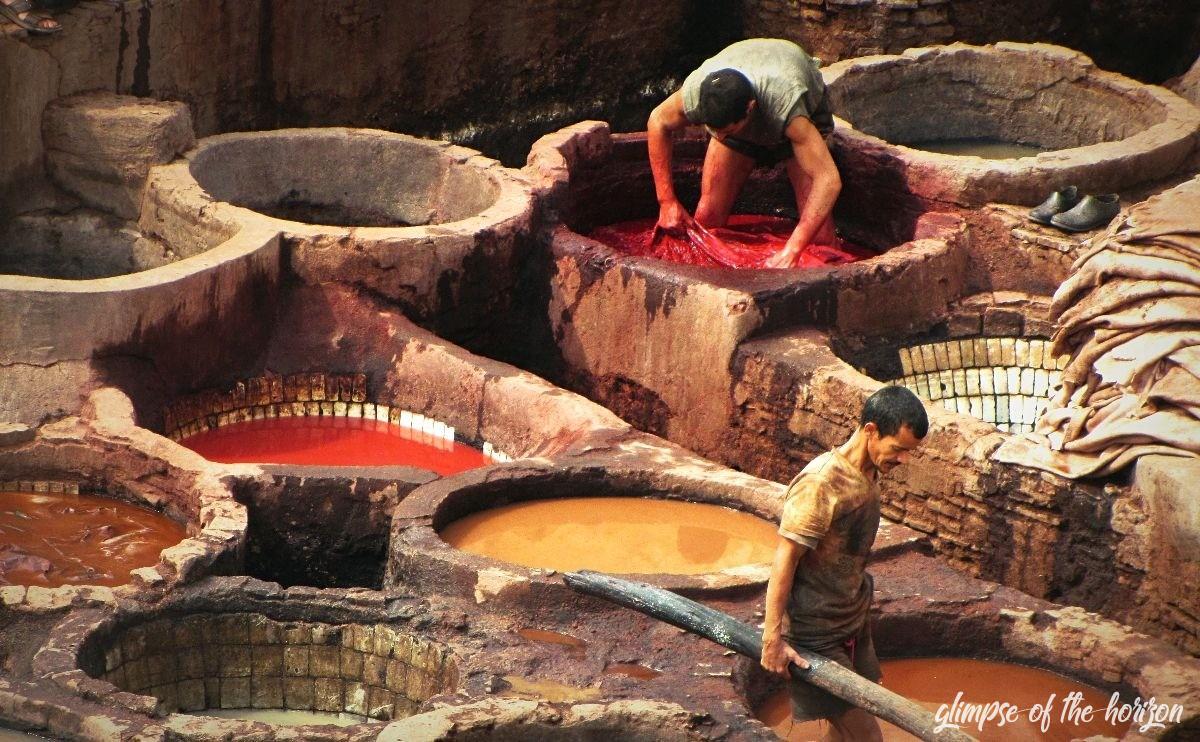 Fez – a journey back in time

Our time in Morocco came to an end, but one highlight was still waiting – with Fez we entered the secret Moroccan capital of education, religion and crafts. We had heard a lot about Fez on our trip through Morocco – especially about its medina, which according to UNESCO is supposed to be the largest medieval old town in the world. And if you believe the Moroccans, it’s also the most authentic.

To get an overview of the city, we went to a lookout on the first day. We overlooked the houses in sandy and white tones. All this was the medina. As far as the eye could see. The houses stood close together, there was hardly any space in between. Already before that we got a lot of tips to find our way around the city. But the most common was: You will get lost – one hundred percent! But the people on the spot will help you to get out of the maze. 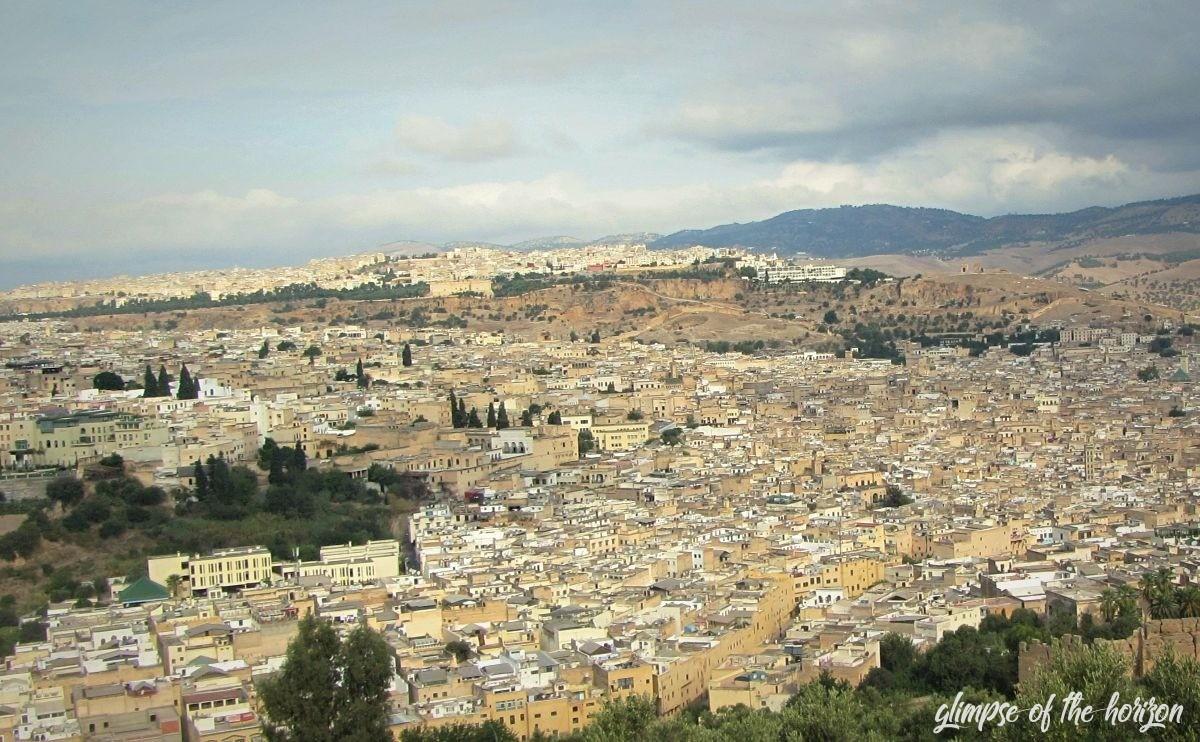 The Medina, claustrophobia in Moroccan

And now we set off for this labyrinth. Without knowing what we would see. Or what at least our path would be. Our hostel was inside the medina, but quite close to the edge, so that we quickly got an access. We chose a way and went to a nearby market. The paths of the medina were narrow, mostly less than three meters wide. Sometimes narrower. All houses were at least three storeys high, sometimes even higher. If higher, wooden constructions were often installed between the houses. 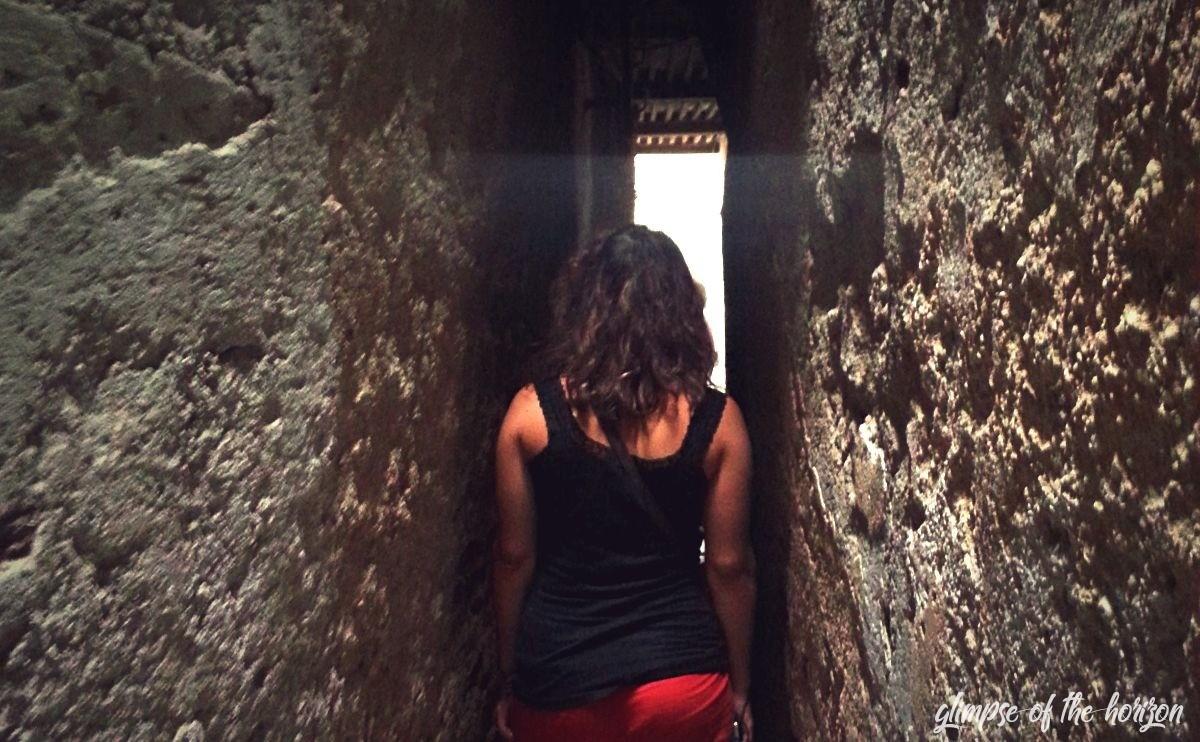 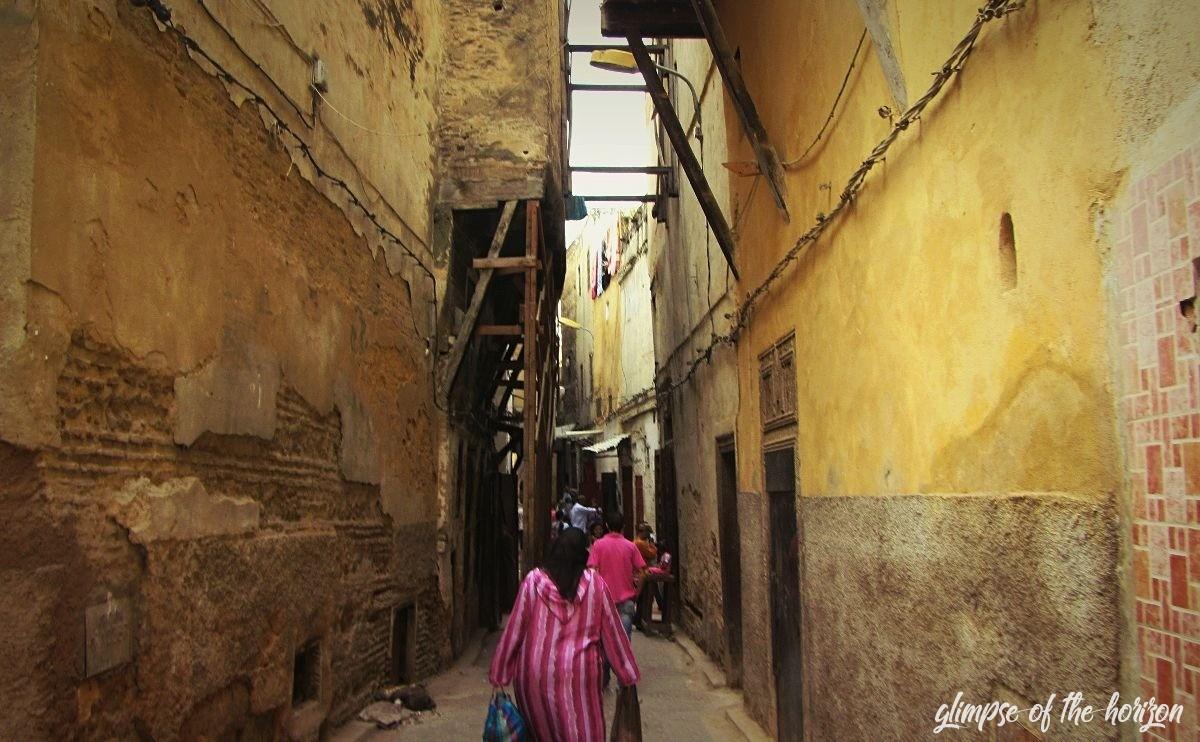 On the way to the big market we passed many stalls where people mainly sold food. The baskets and tables usually took up more than half of the space in the narrow aisles. Everyone crowded in both directions – even more if someone decided to buy something at the provisional stands and stopped. 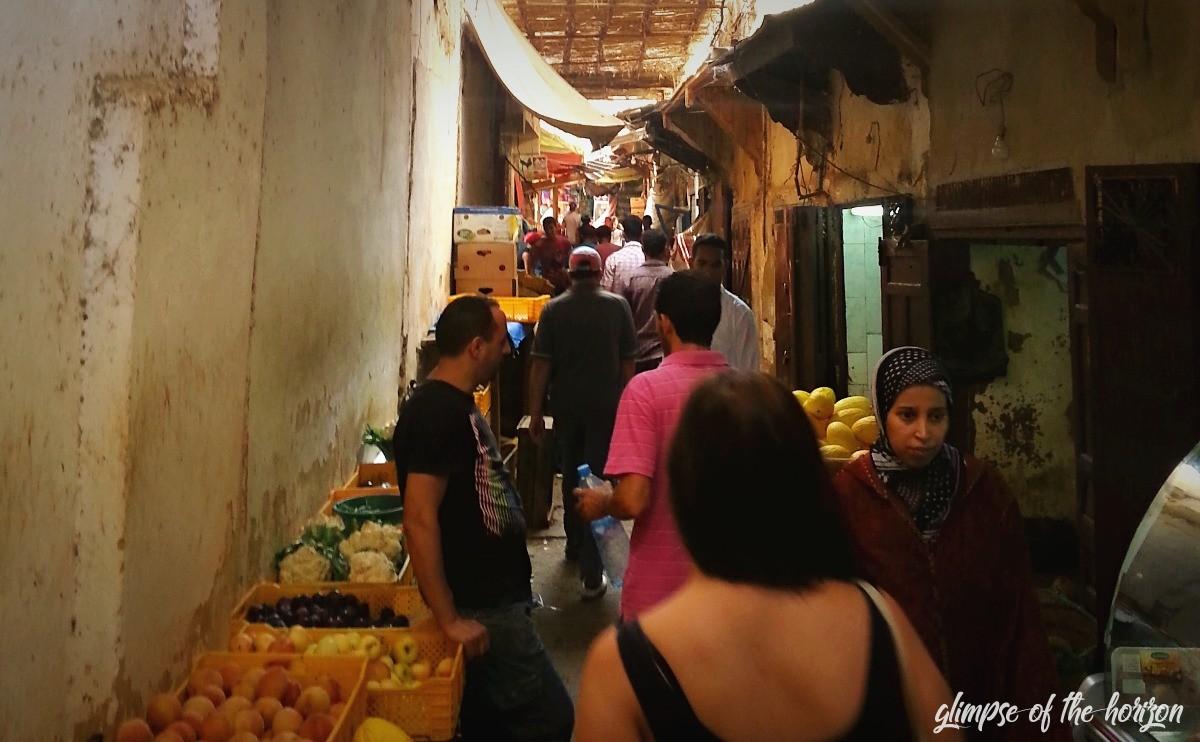 We actually found the market where many Moroccans offered a wide variety of vegetables, meat and fruit. There was a lot of activity on the square. It was bright, because the sky had one of the few possibilities to shine into the medina of Fez. The whole city was quite cold by Moroccan standards. 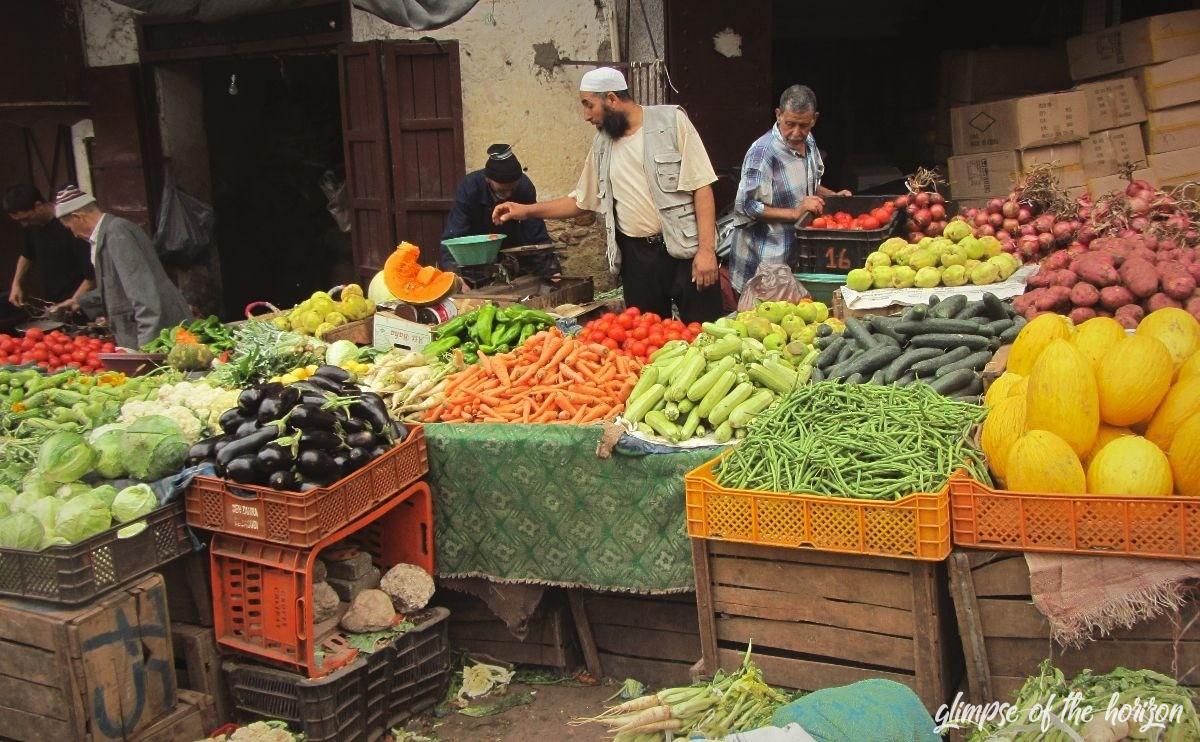 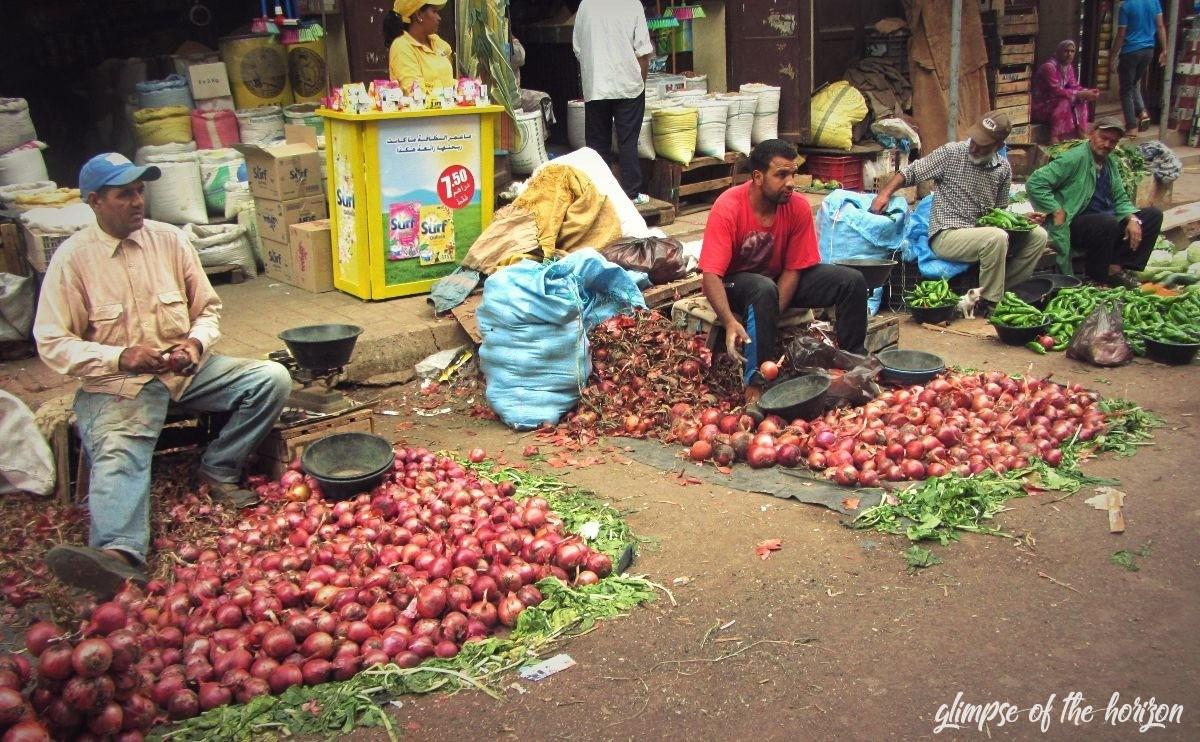 A Moroccan spoke to us, whom we had already met in front of our hostel. He offered to show us around the medina. We gladly accepted the offer – knowing, of course, that he would not do it for nothing. But on good luck it was inevitable that we had to ask someone who lived in this crazy city anyway.

And so he took us on the journey. We visited the various craftsmen – Moroccans who made shoes and carpets, bakers of wonderful flatbreads or even a leather goods shop. The store was full of bags and belts. And here it suddenly smelled very different. We had arrived in the tanner quarter of Fez. Leather is still extracted here in the traditional way. We went onto the balcony of the store and marvelled at what happened here. 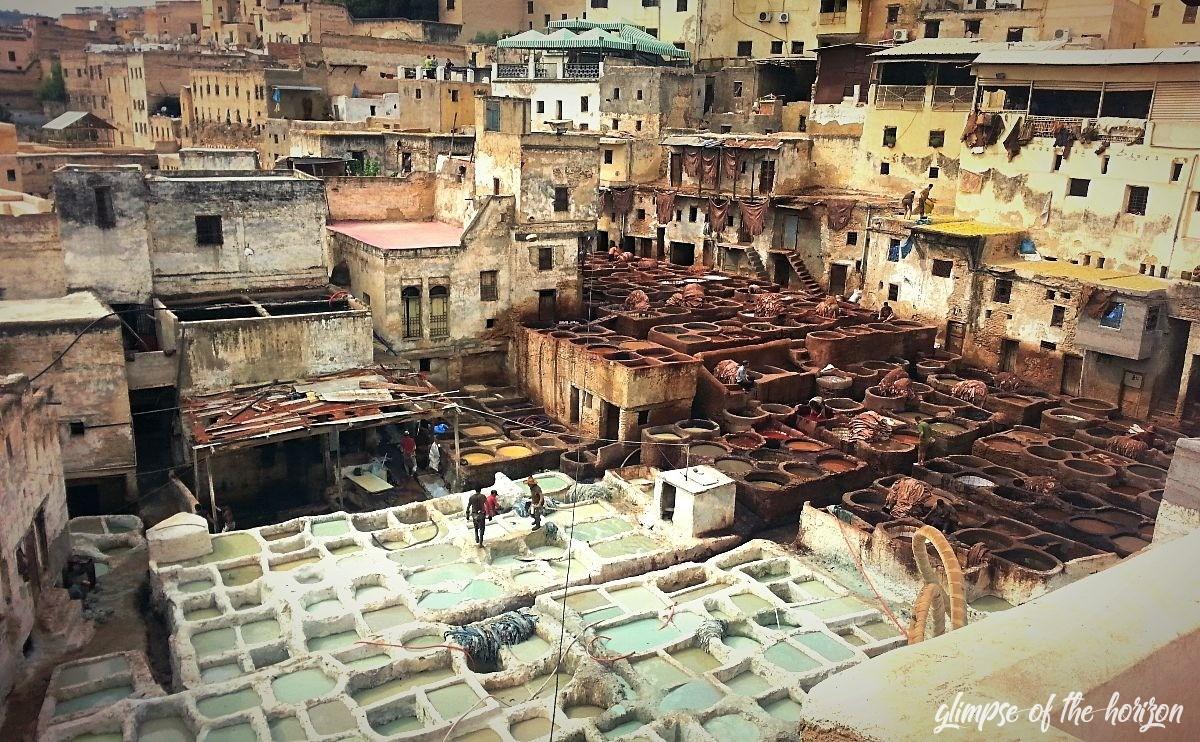 Without shoes or gloves, the men worked in the midst of the many small holes that were bricked into the ground. Here we tanner, dry and dye. The means used stank. The rotting skin flaps stank. Meat and hair must be removed from the leather. Sometimes pigeon excrement is used to make the skins even softer. The workers have to stomp on it, knead it and hang it up. And this at almost 40 degrees – all day long. 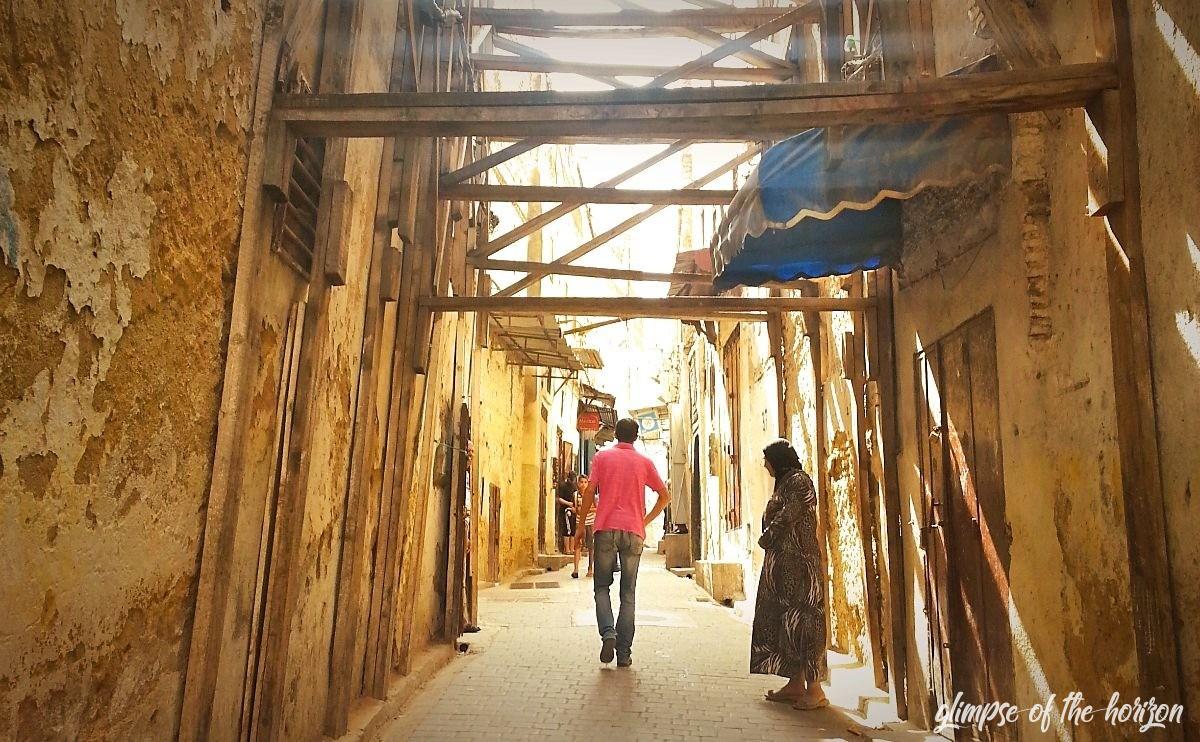 We didn’t feel too comfortable watching the workers continue with their bone-job from the balcony and decided to dive back into the medina itself. However, there was no lack of bone jobs here, since Fez is a melting pot of craftsmanship. Work was bustling everywhere. We went through the medina again, this time out of the turmoil and to the edge of the old town.

So this is how the mosaics are made

The houses we walked to were all about ceramics. We were very taken with the many great mosaics all over Morocco and we were glad that we were invited to learn more about the technique of mosaic ceramics. We entered the entrance, whose cupboards hewn into the wall housed a multitude of plates and pots. Not much of the many colourful mosaics could be seen yet. 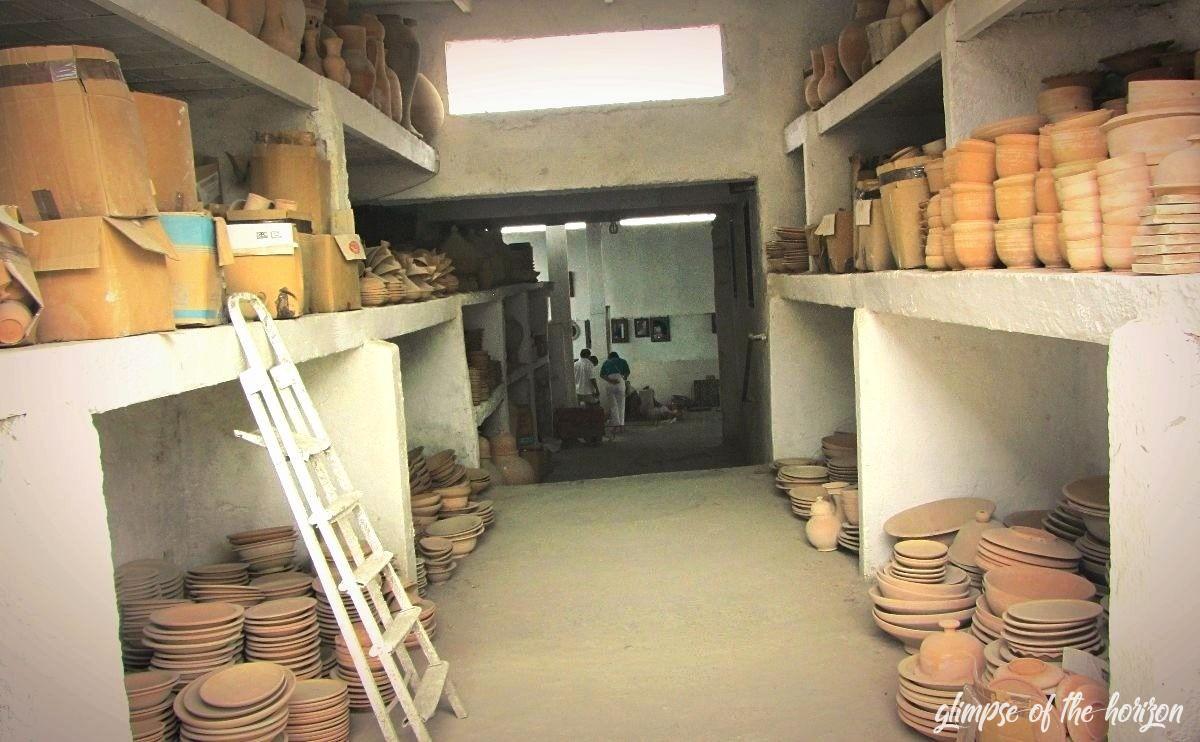 A small hall followed, in which some workers sat at the mosaics. Every smallest stone was applied individually until the entire mosaic is created. An incredible job that required a lot of skill and patience. And power. The workers cut all the stones out of large blocks to use them afterwards. 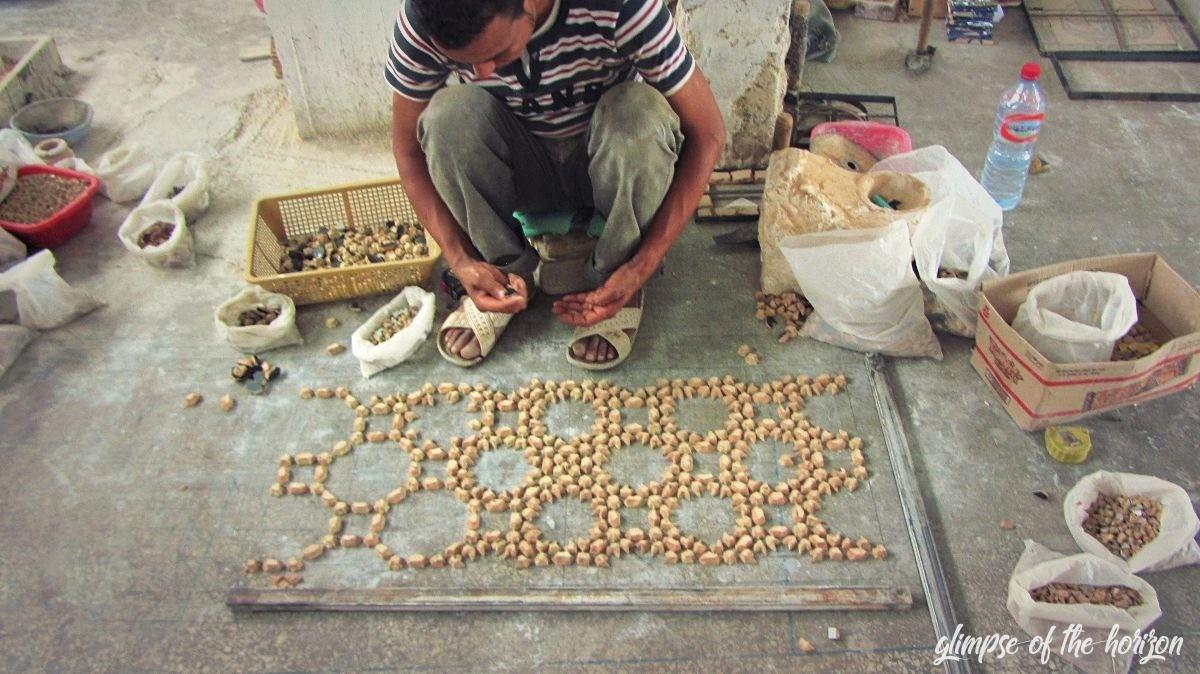 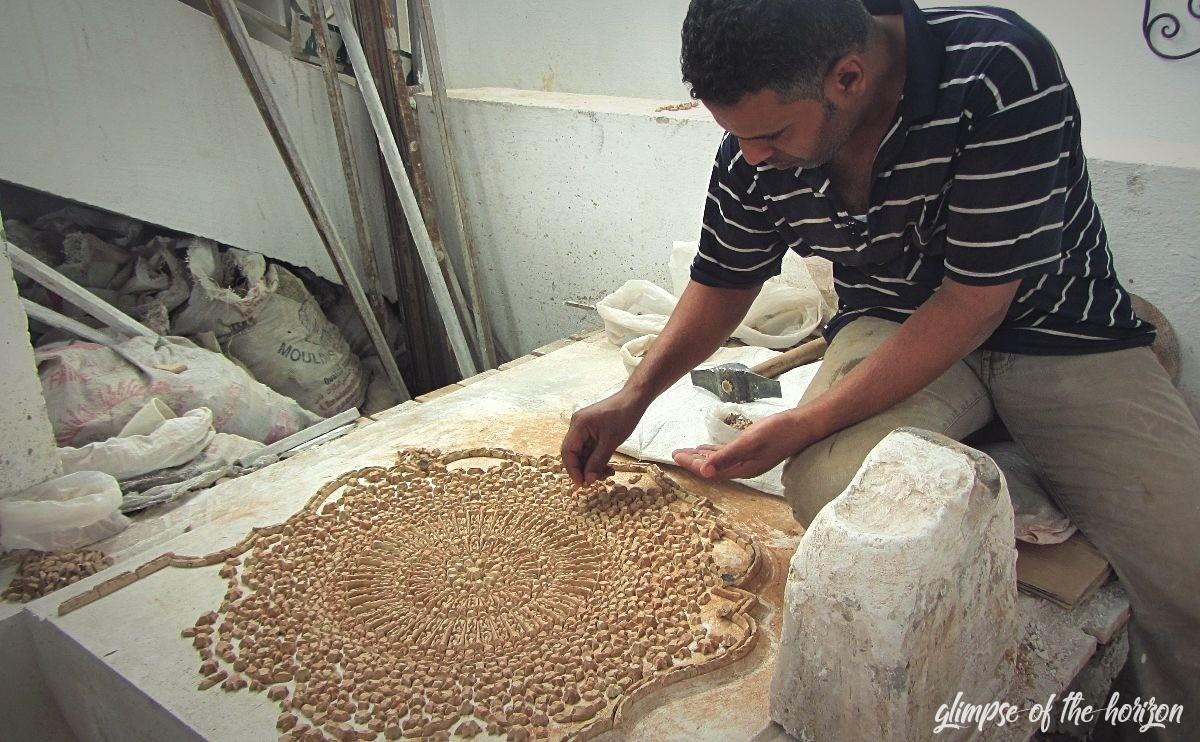 In the next hall were the works of art that were soon sold. Great plates, fountains and washbasins in rich green, blue or red. “Madness,” we thought. We looked to the left and saw the workers folding stone by stone and looked to the right where the beautiful coloured fountains stood. 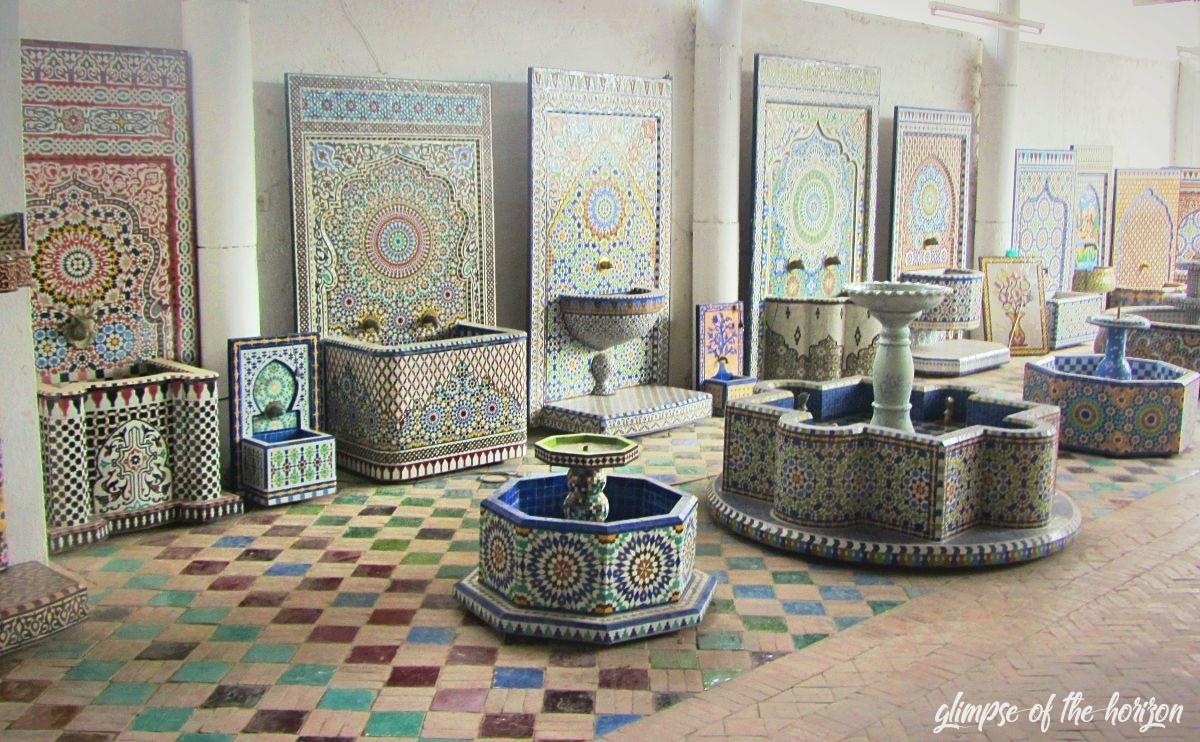 Full of new impressions we went out of the halls and back to our hostel. There was so much to discover in this town. We spent two more nights in Fez and enjoyed strolling through the corridors and eating really well. One last time before we finished our trip through Morocco, we ate from the tajine and drank peppermint tea. 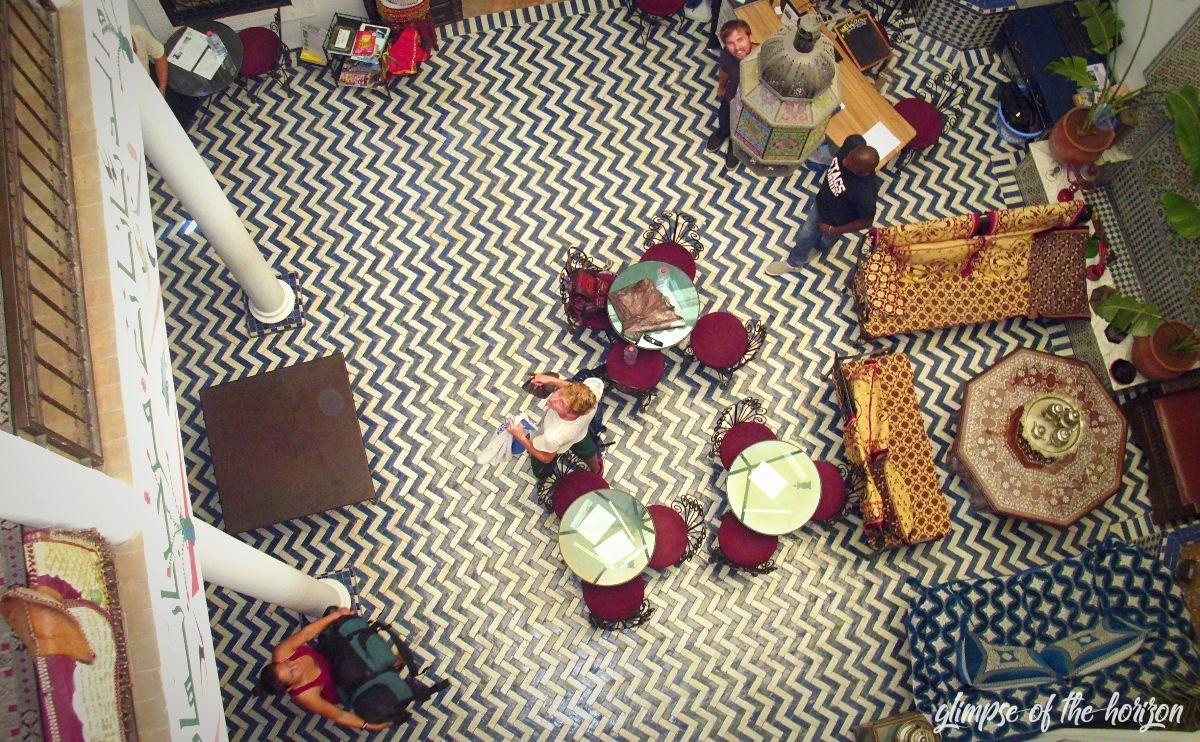 The city was so completely different from the touristy and comparatively clean Marrakech or the rather quiet port city of Tangier. Fez is dirty. Fez is loud. Fez is authentic and primeval. And that’s a very big compliment.