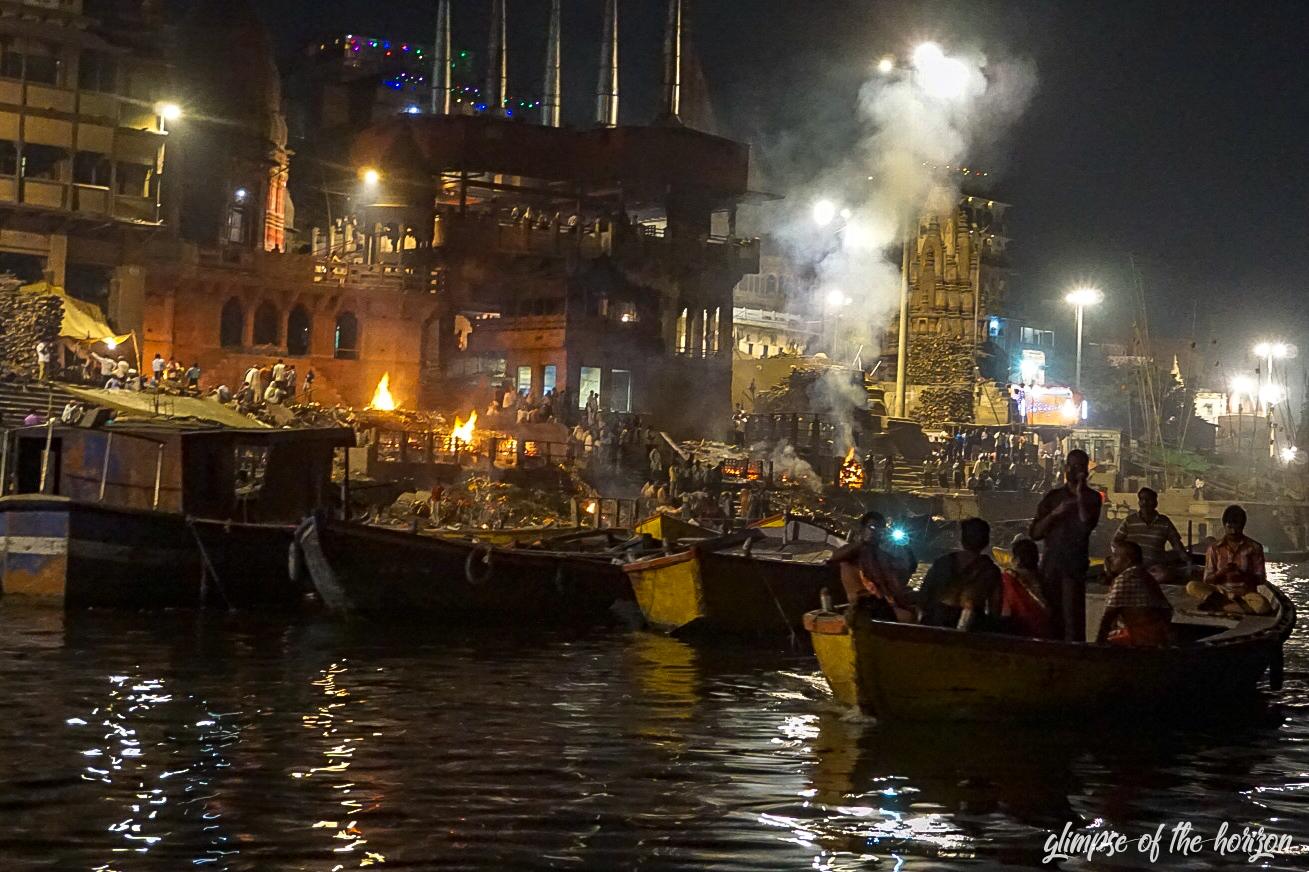 We struggled with whether we would visit the city of Varanasi. It is more in the east of the country and therefore far away from the western route we had planned for us. In the end it was the conversations with other travellers and Indians that led us to explore Varanasi.

Varanasi is the holiest city in India. One could guess this from the number of cows on the streets alone. It is strange to drive TukTuk or to walk through the pedestrian zone while a bull with two huge horns trudges towards you. The animals are sacred in Hinduism and part of the natural cityscape – even more so than in the cities we visited before. 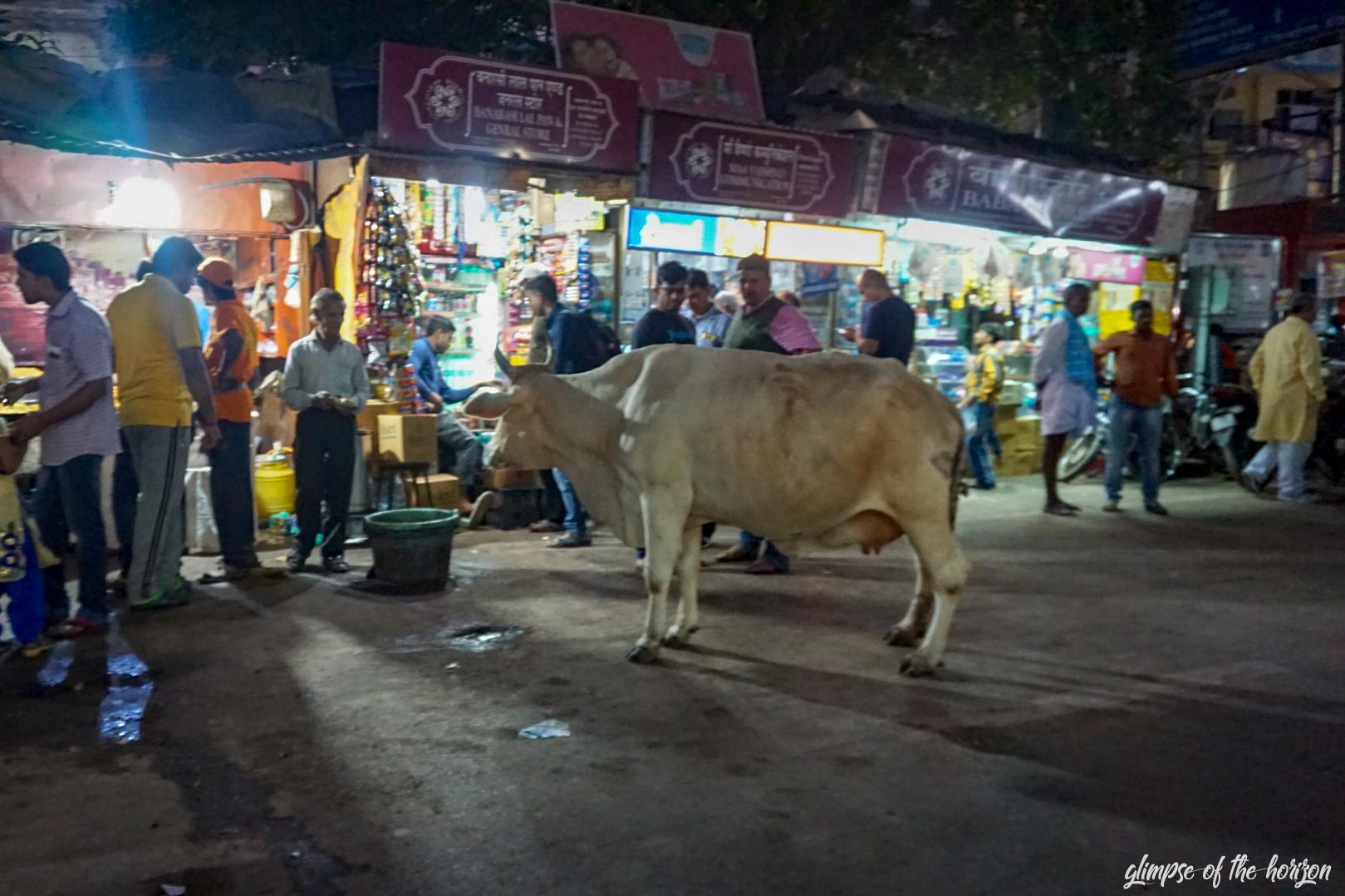 Everything here was a bit more extreme: From every point of the city you can see a temple. And if we had seen a lot of garbage and poverty before, it was especially serious here. A unique smell lay over the city: a mixture of garbage, animals, spices and incense sticks.

The most special point of the city is undoubtedly the bank of the Ganges. In the morning you could see Indians here cleaning themselves and their clothes in the river and drinking the water. It is the most sacred river of Hinduism. And yet one should not actually drink from it, since the water pollution by coli bacteria exceeds the limit value of the threatening by about a thousand times. 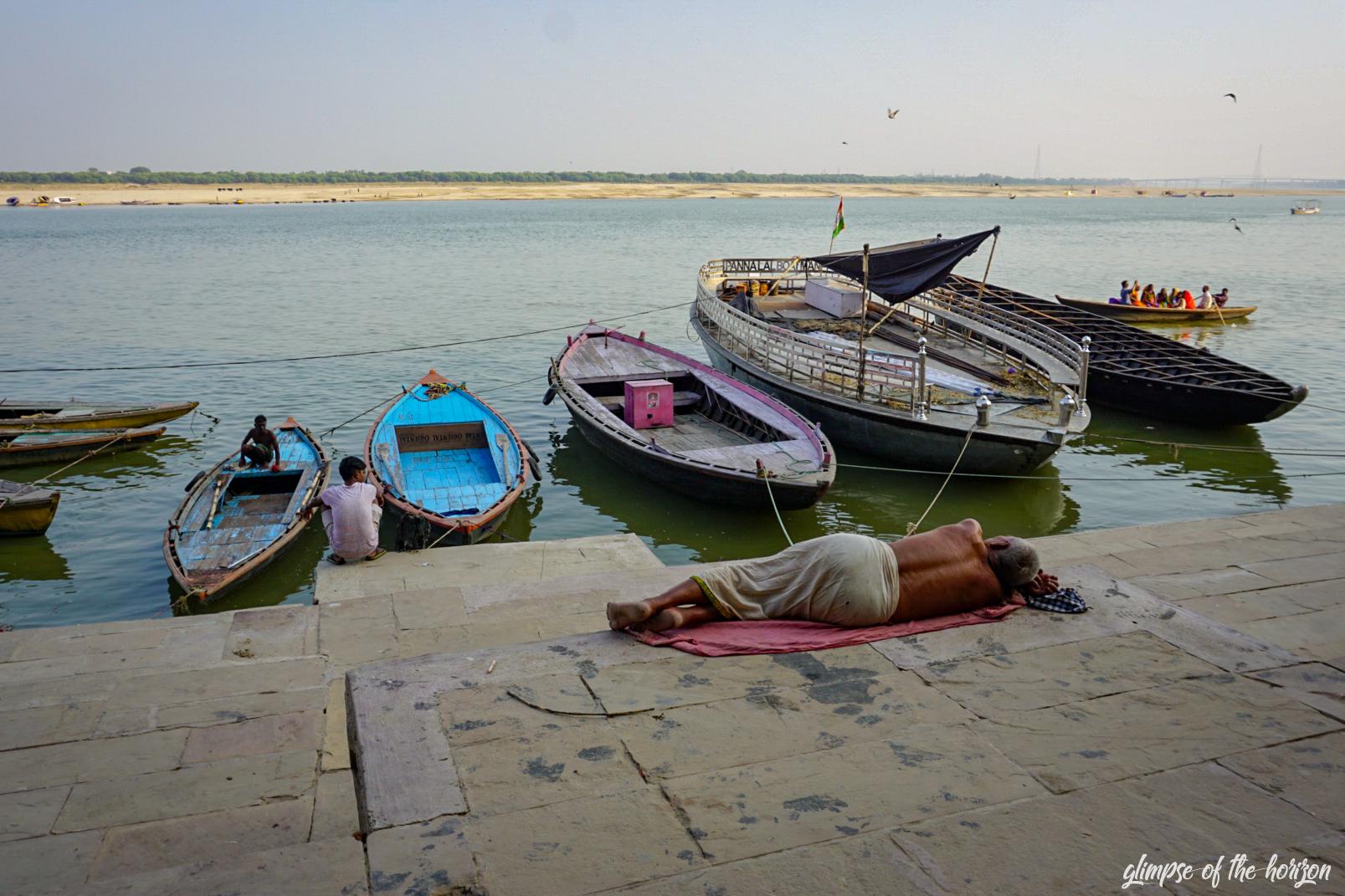 Every evening, ceremonies take place at certain places along the banks of the Ganges, with thousands of people gathering. Many people get into boats, because the stairs of the shore are hopelessly overcrowded and you get a better view of the priests who perform the ceremony. 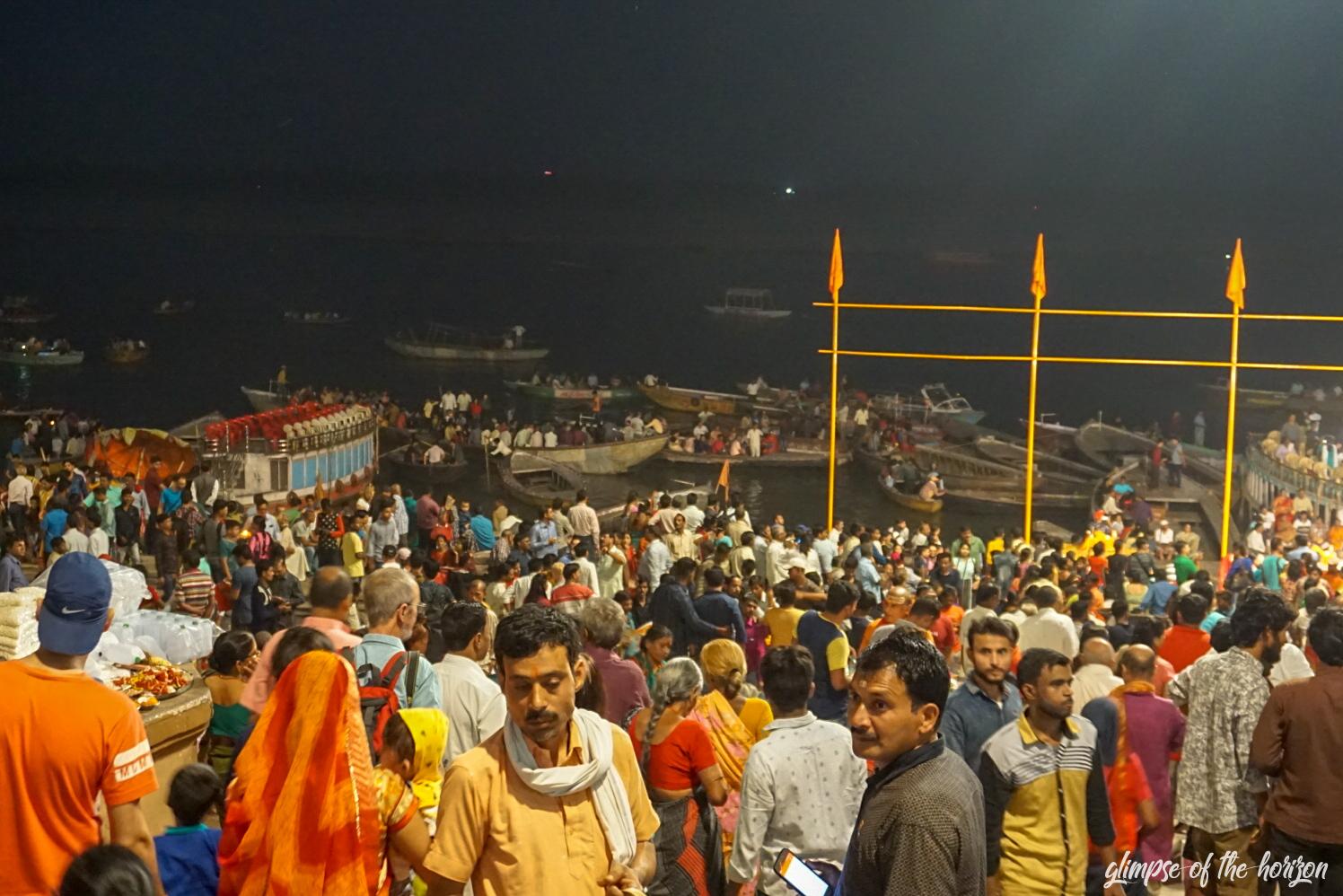 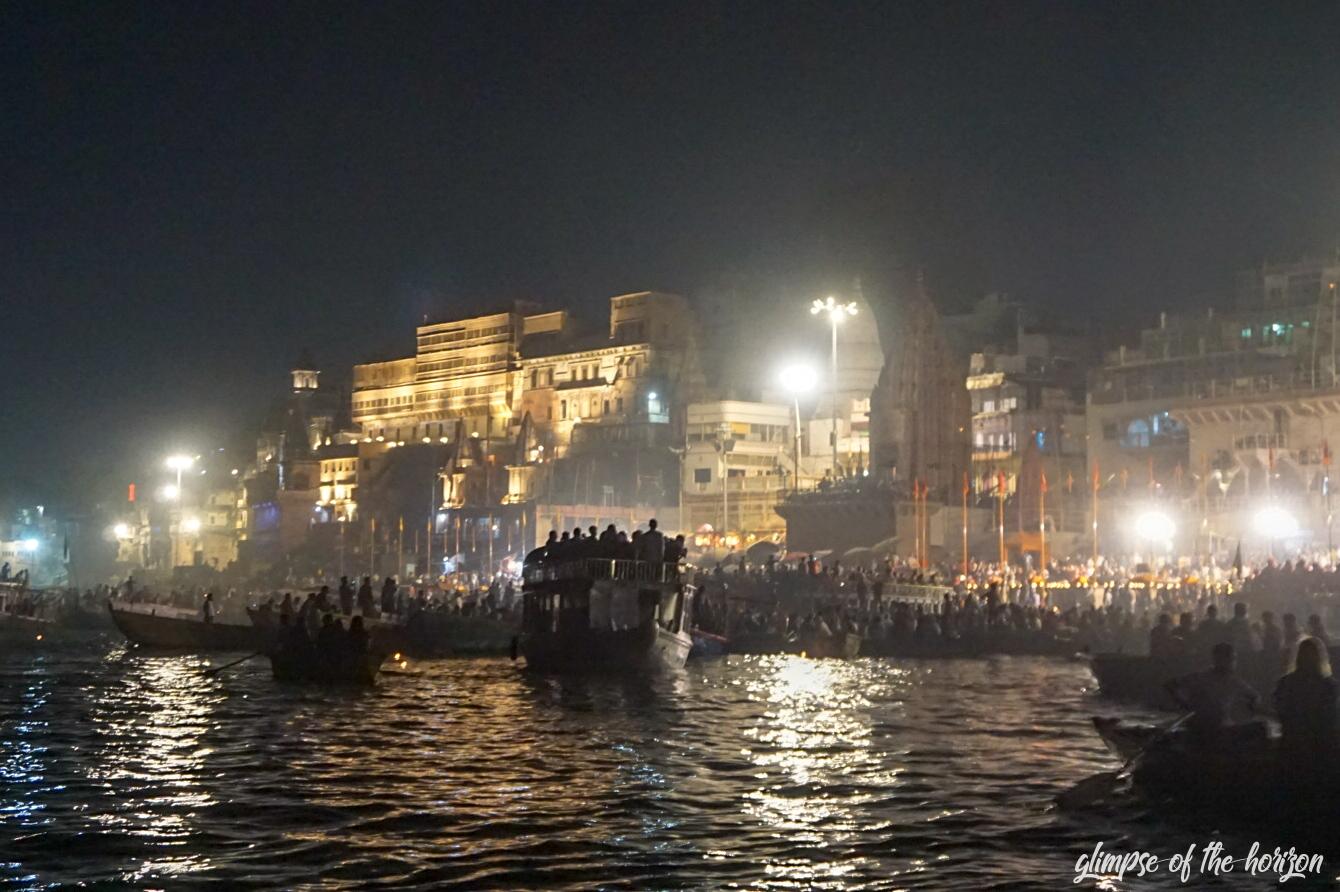 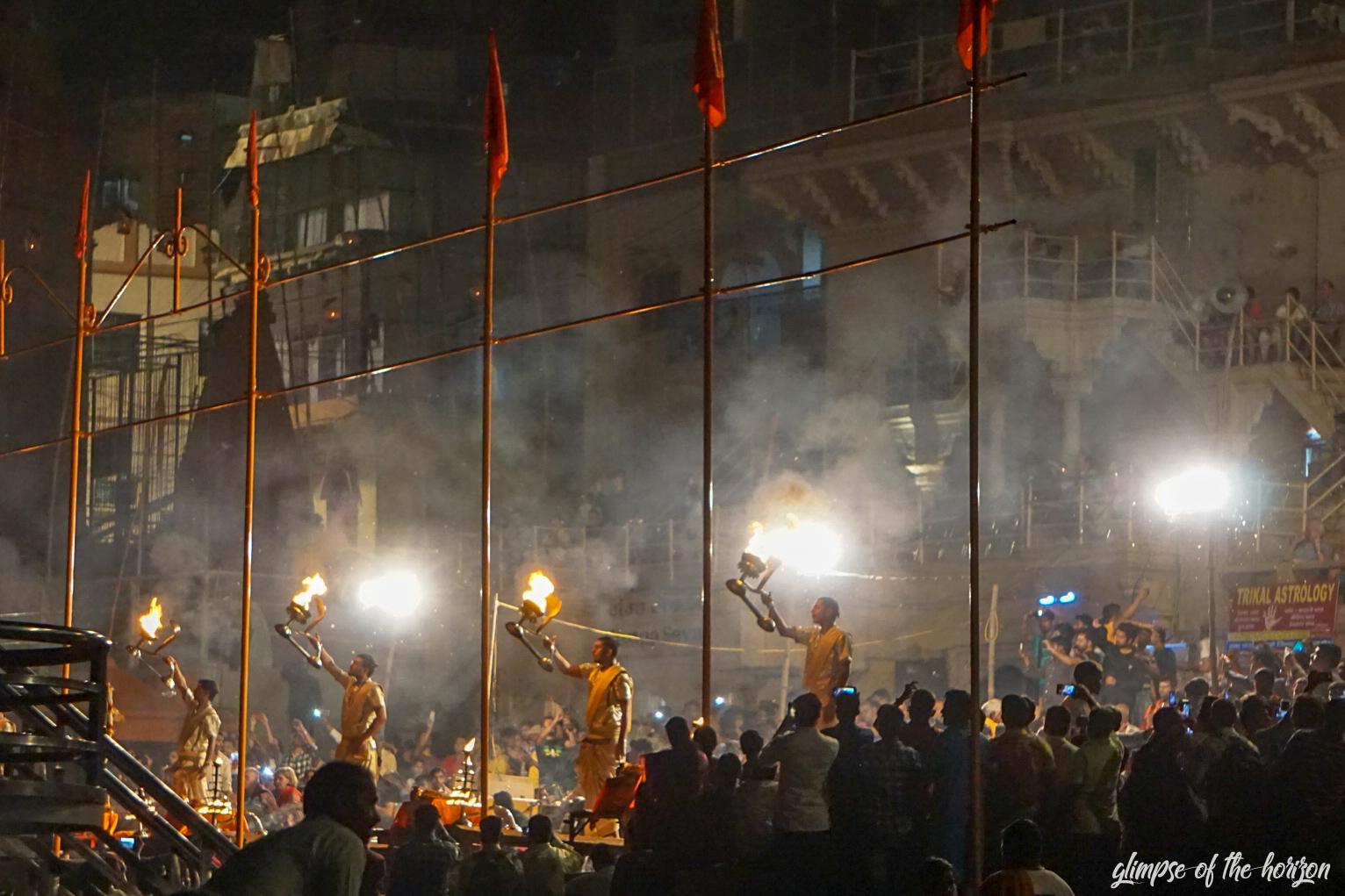 We got into a boat and drove down the Ganges a bit before the ceremony. From a distance we saw big fires illuminating the night sky. Next to it a few dozen people gathered and climbed up and down a big staircase. What was burned here and what were the people doing there? 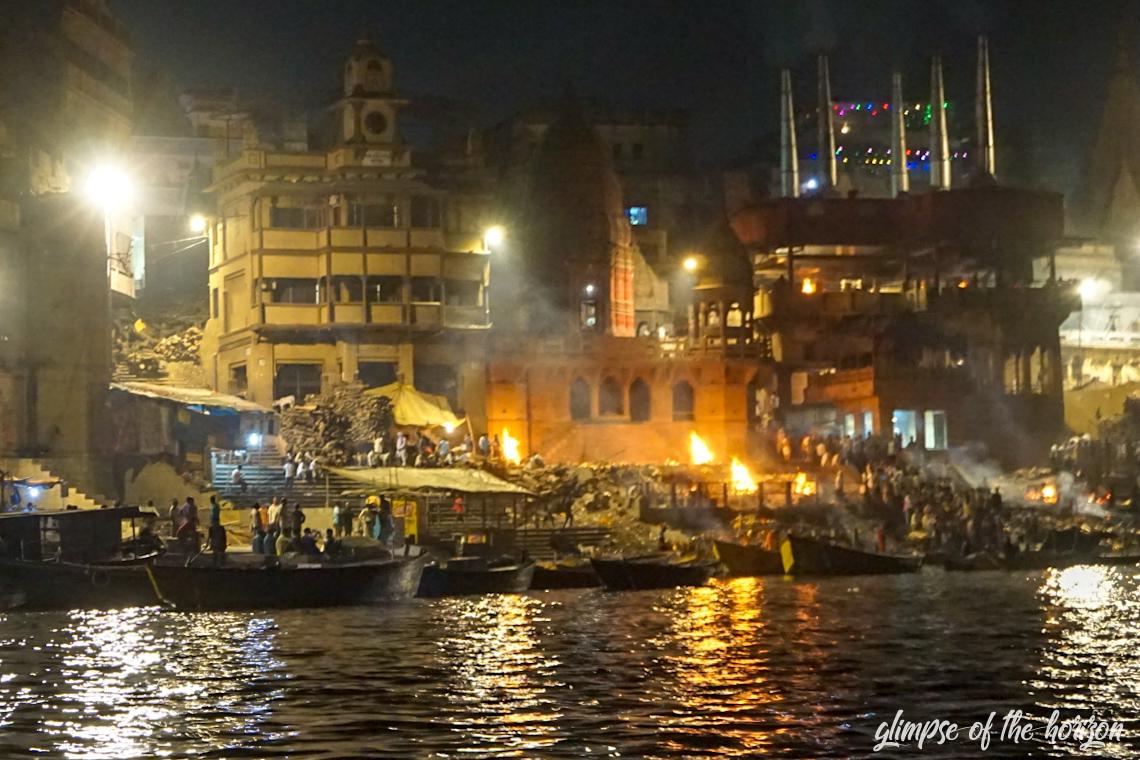 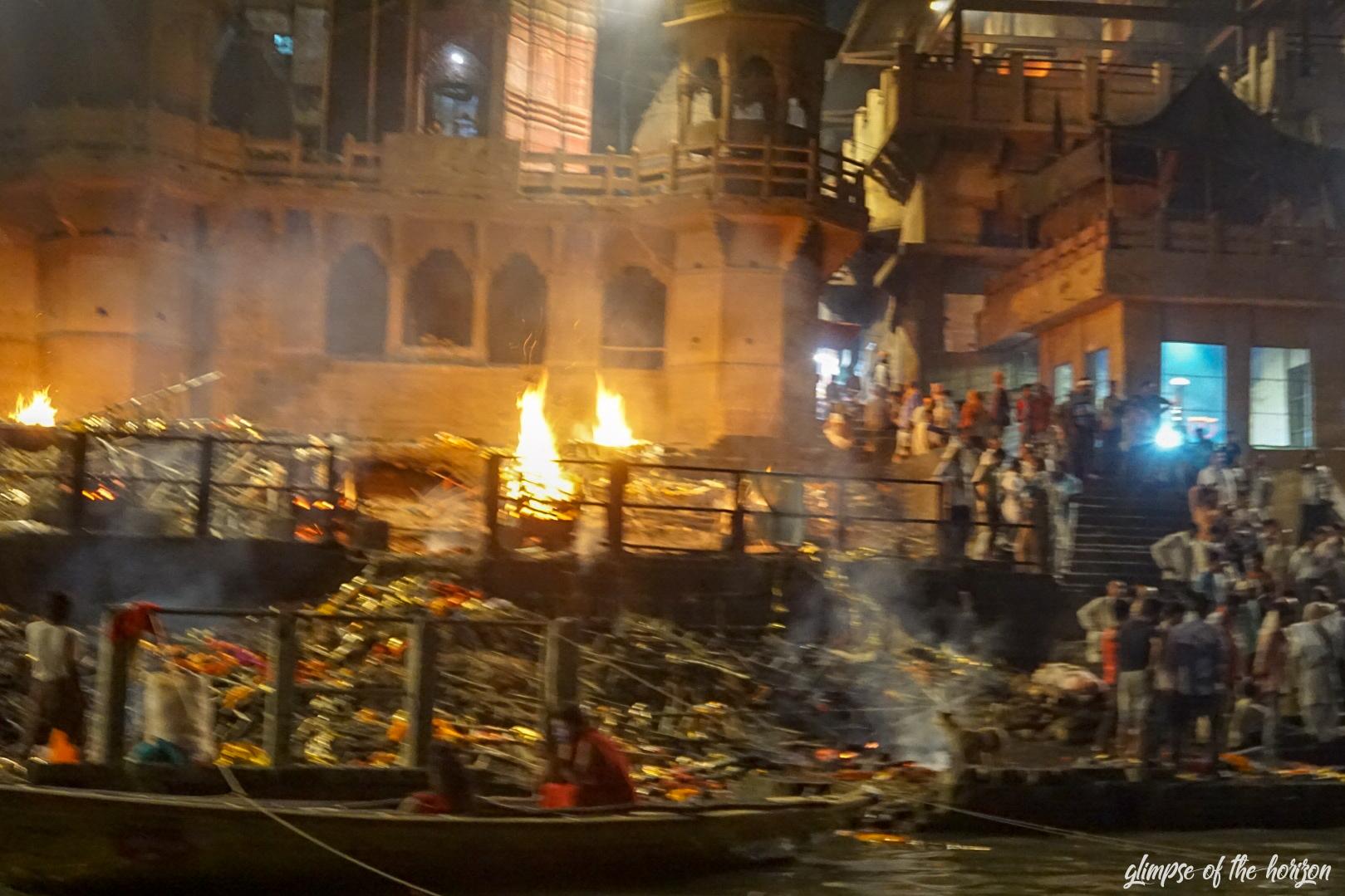 How unreal this place seemed. Like from another century. Or like from another planet. But it was absolutely normal and desirable to be burned here yourself. Rich Indians take their deceased relatives by plane to Varanasi in order to grant them this last honour. Others travel here by car or train. It’s unimaginable to sit for umpteen hours in the train next to the dead family member and then finally bring him to the river bank.

Varanasi seemed like a compressed and highly concentrated load of India, which should certainly not be done at the beginning of his journey. Looking back, we are happy to have been here, even though it was sometimes difficult to be confronted with the massive poverty, the many stray animals and the widespread garbage problem. 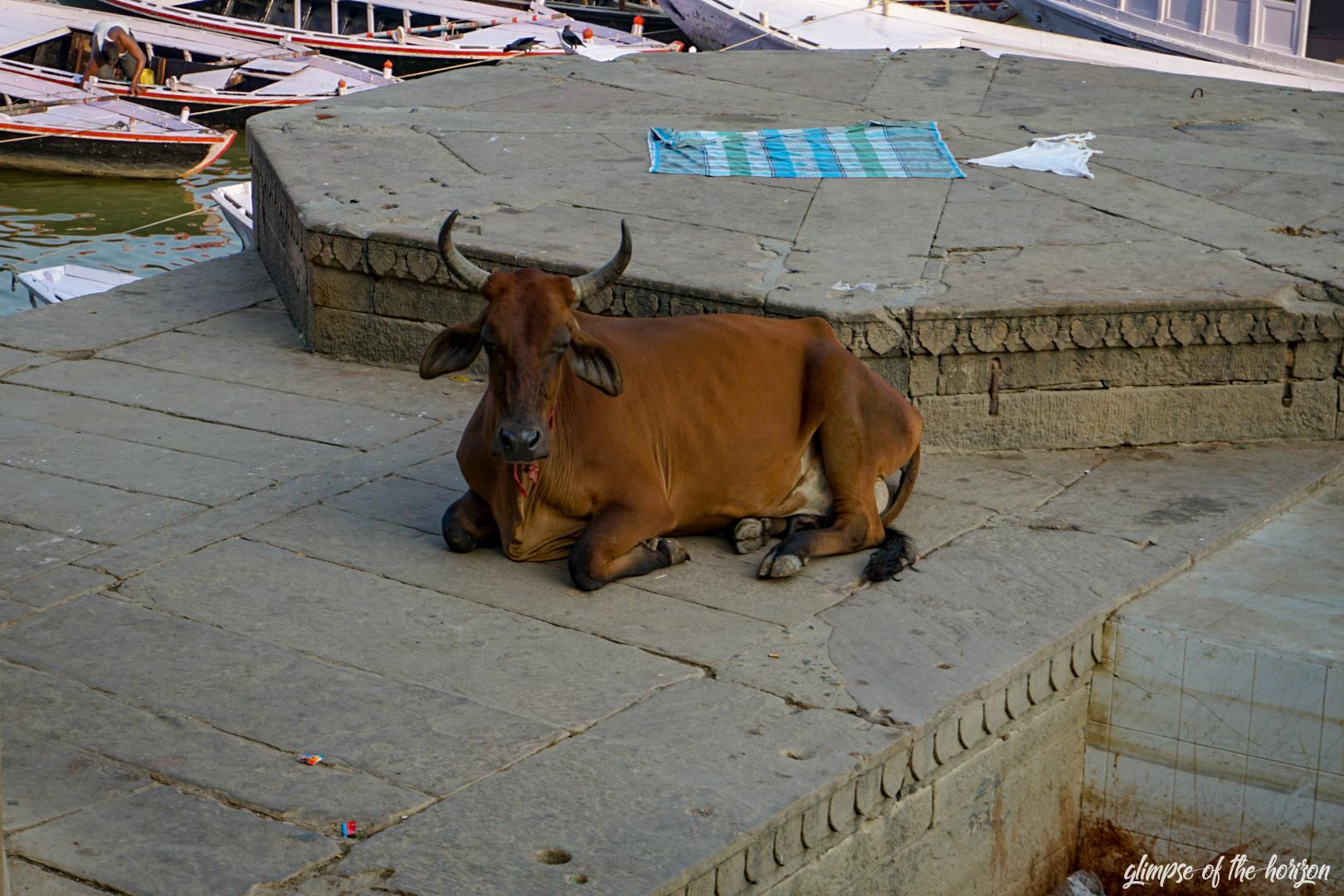 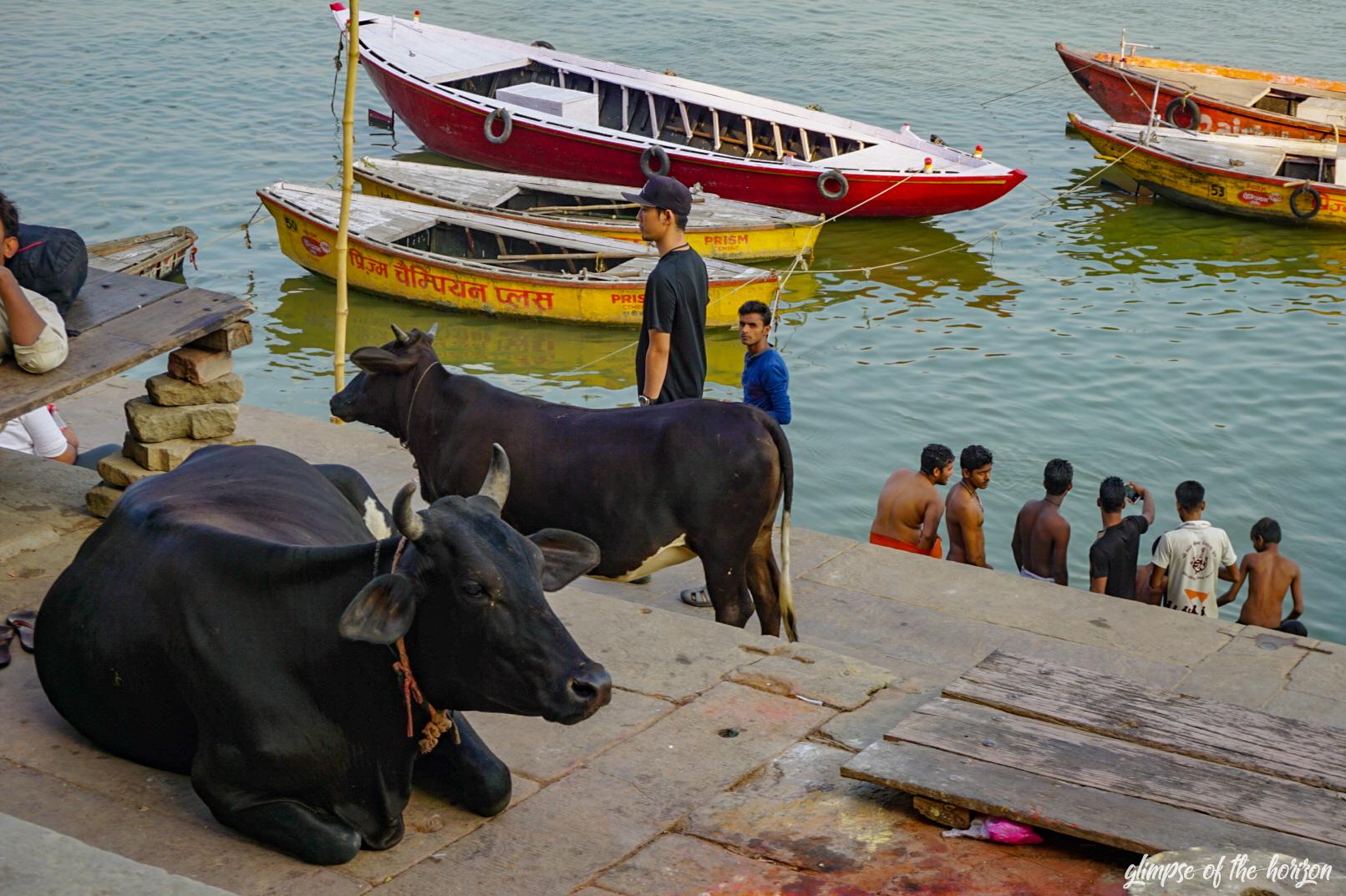 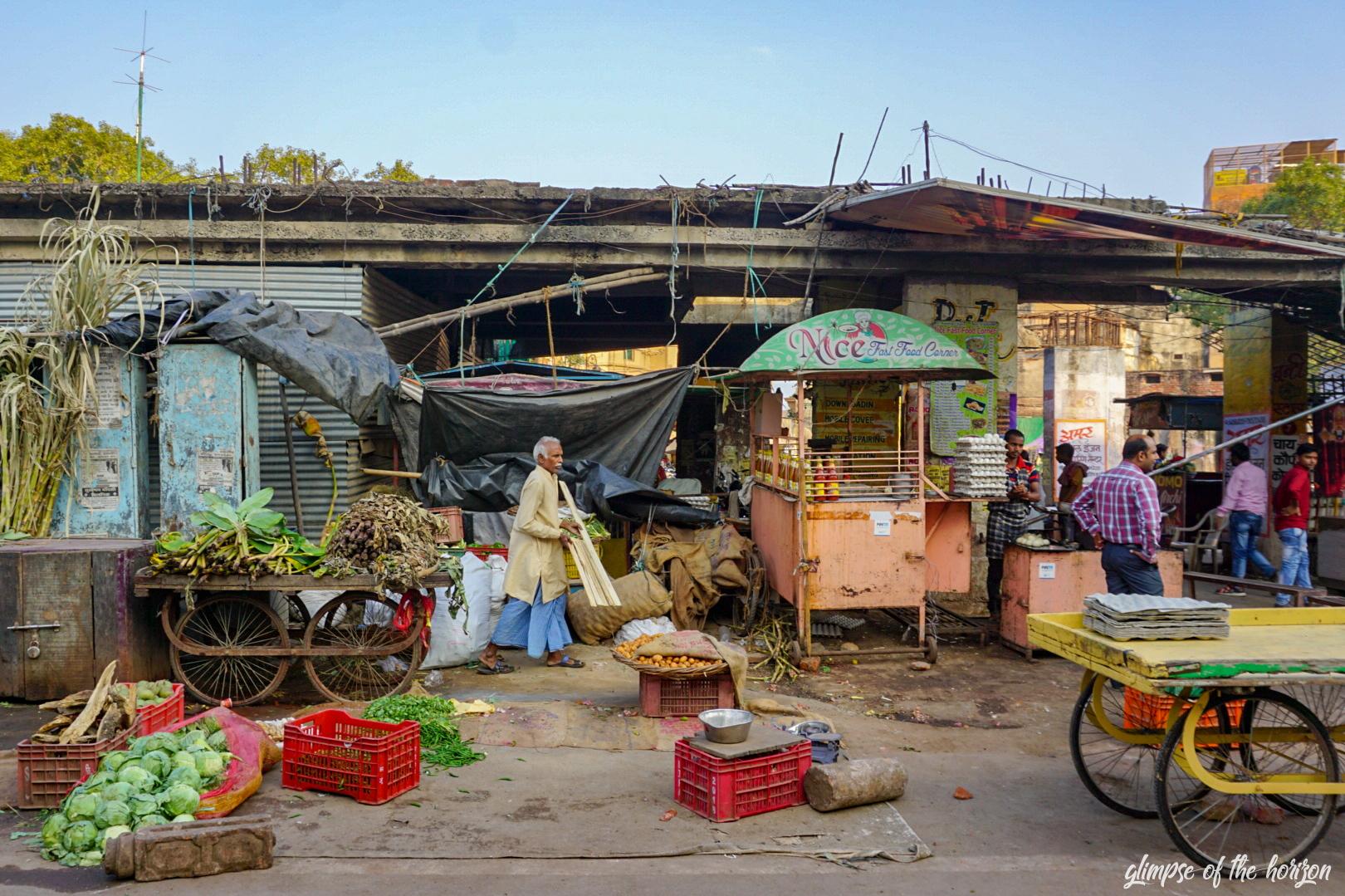 Varanasi, with all its religious influences and cultural impressions, is definitely one of the places that will impress us the most – for sure.

What remains of Varanasi in the mind: