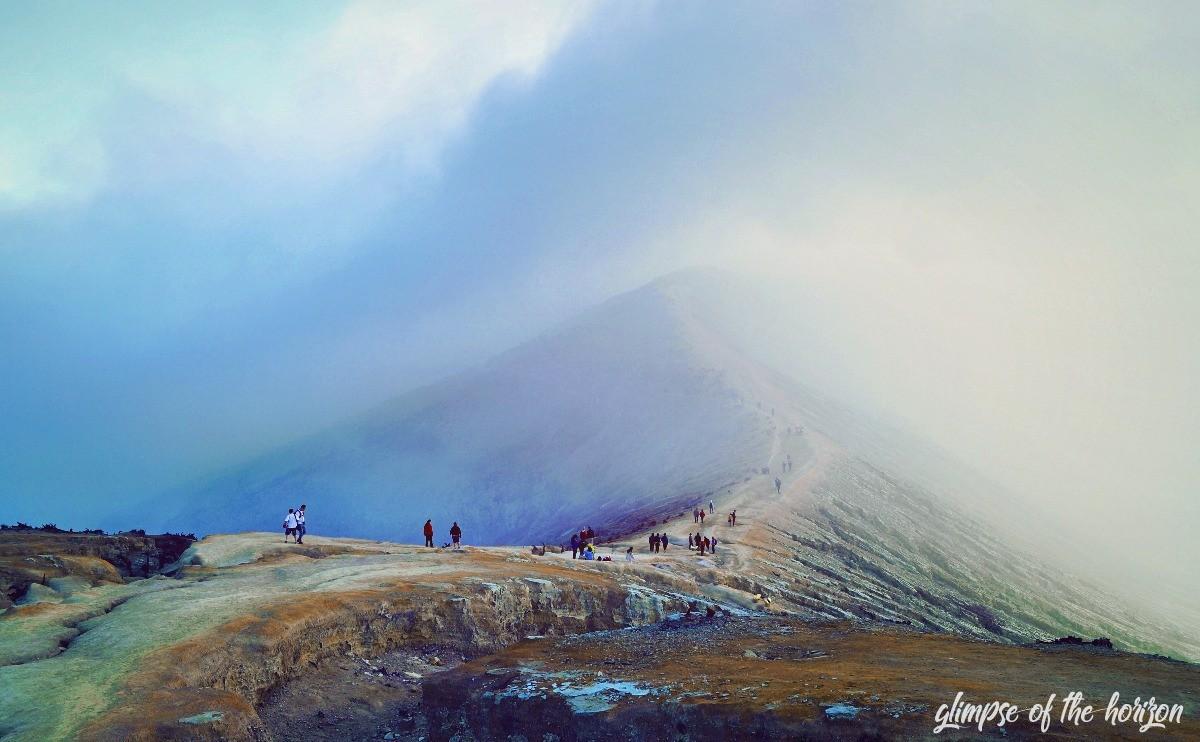 Mount Ijen – once in a lifetime

We have never experienced anything like this before or after. Unique. Fascinating. Breathtaking – but the last one mainly because you really couldn’t breathe. But one thing at a time.

There is an advantage to travelling in western countries – there are regulations that keep the too dangerous areas away for tourists. And there are even more guidelines on the conditions under which people are allowed to live and work at all. And above all: When not. This consideration becomes of immense importance in the following narrative.

We were just coming from climbing the impressive Mount Bromo to get further east to the edge of the island of Java. Here, the local Indonesians told us, we will see a volcano like we had never seen before. The Ijen – a volcano in the interior of which sulphur is mined. The stories sounded crazy: In the middle of the crater is an acid lake that is almost 1000 meters long, 600 meters wide and almost 200 meters deep. 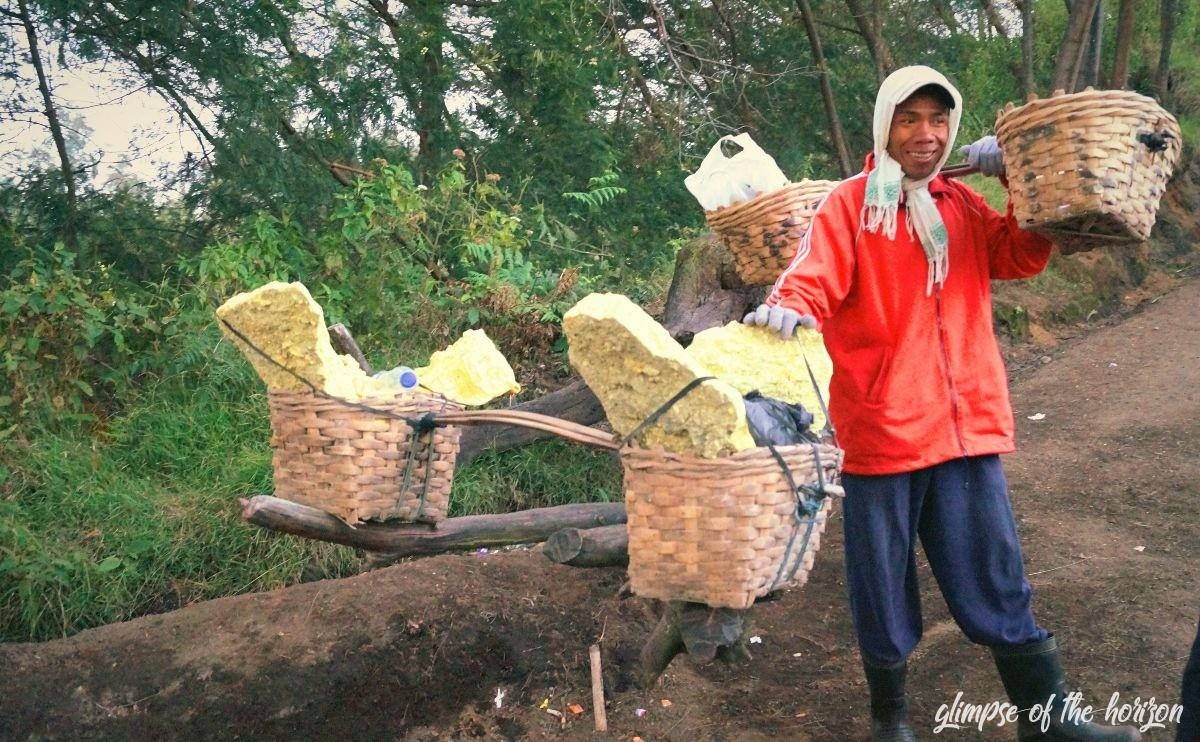 We arrived at the foot of the volcano and got out of our car. Strangely quiet around here. The way was problem-free to walk, quite evenly was the underground. Three kilometers up 500 meters – in about 90 minutes. After a quarter of an hour we meet for the first time an Indonesian working in the sulphur mine. On his shoulder he wore large woven baskets connected by a rattan pole. The large chunks of sulphur flashed out of the baskets. It’s a foretaste of what’s to come. 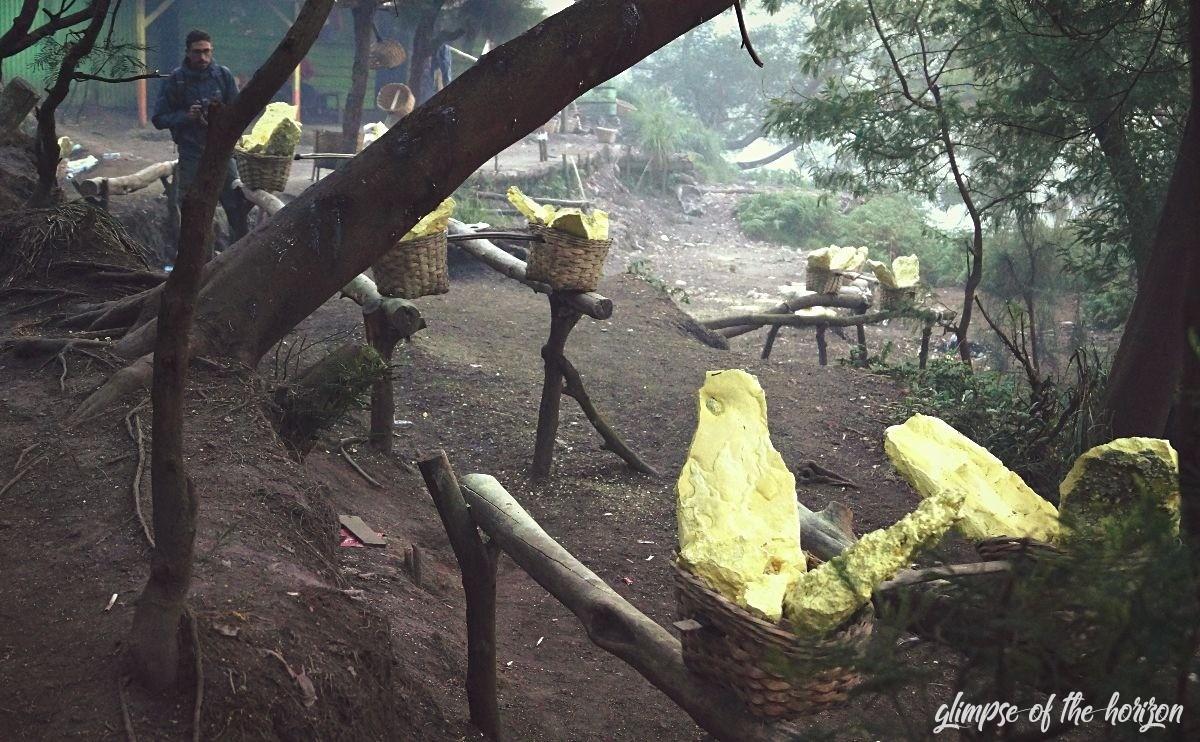 There was a stop halfway along the way. Some workers put their baskets here, drank and ate something. Some of them stayed here overnight – up to 30 workers slept here in one room, without electricity or water. The atmosphere was quiet, there was hardly any talking. You could see how this work was close to people not only physically but also psychologically. Twice a day they walked up this path and down again, packed full – up to 90 kilograms on their shoulders.

It seemed strange, but some had a portable shop to buy souvenirs. However, they were not postcards, necklaces or amulets – no! What was sold here was sulfur. Pure sulphur in various forms. Sometimes as Hello Kitty, as turtle, plane, heart or other. A very special souvenir. 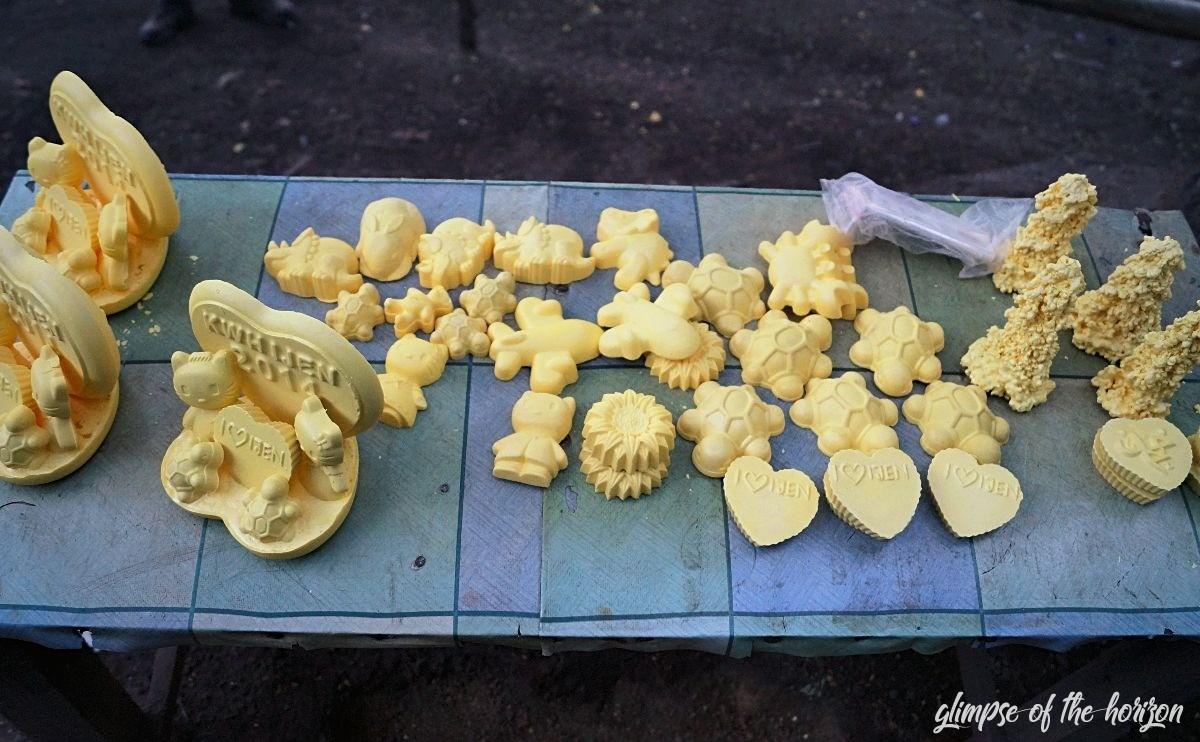 After a short stay at the barracks we moved on to the summit of the volcano. More and more workers came towards us and other tourists also made their way down. Strikingly many had a face mask on. This was also recommended to us and so we carried it in our pockets – we did not yet see the reason to have to put it on.

Should I stay or should I go?

As we moved on we realized that we had had a restless day of Ijens. It got foggier. And fog doesn’t mean that steam just takes away the view. Here the steam takes your breath away. Nobody walked on the paths without a mask and the mood became more and more depressing. Unbelievable to see that the workers all smoked – how could they stand it? It was clove cigarettes. At least they tasted of something, as the workers completely lost their sense of smell and taste after months of work. 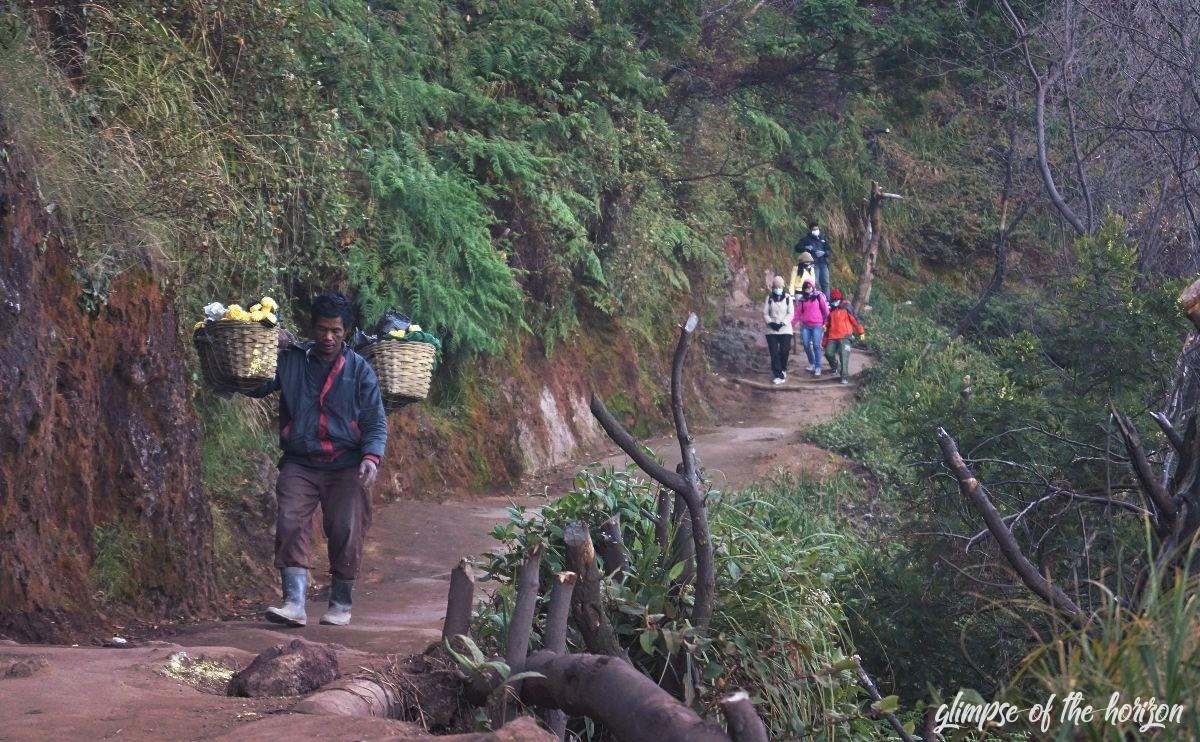 And here we were. In the vanguard of the Hellmouth. Step by step we approached the summit. But with each meter the breathing became more difficult – it felt as if you pumped poison into your body with each breath. And it didn’t just feel like it – it was. When the body signals: “Stop it!”, then you should listen to it. And it was hardly necessary any more to think about it, as we simply could not breathe. Not at all. So after two thirds of the way we broke off briefly and walked down a few steps. We sat down and wondered why we were even doing this. 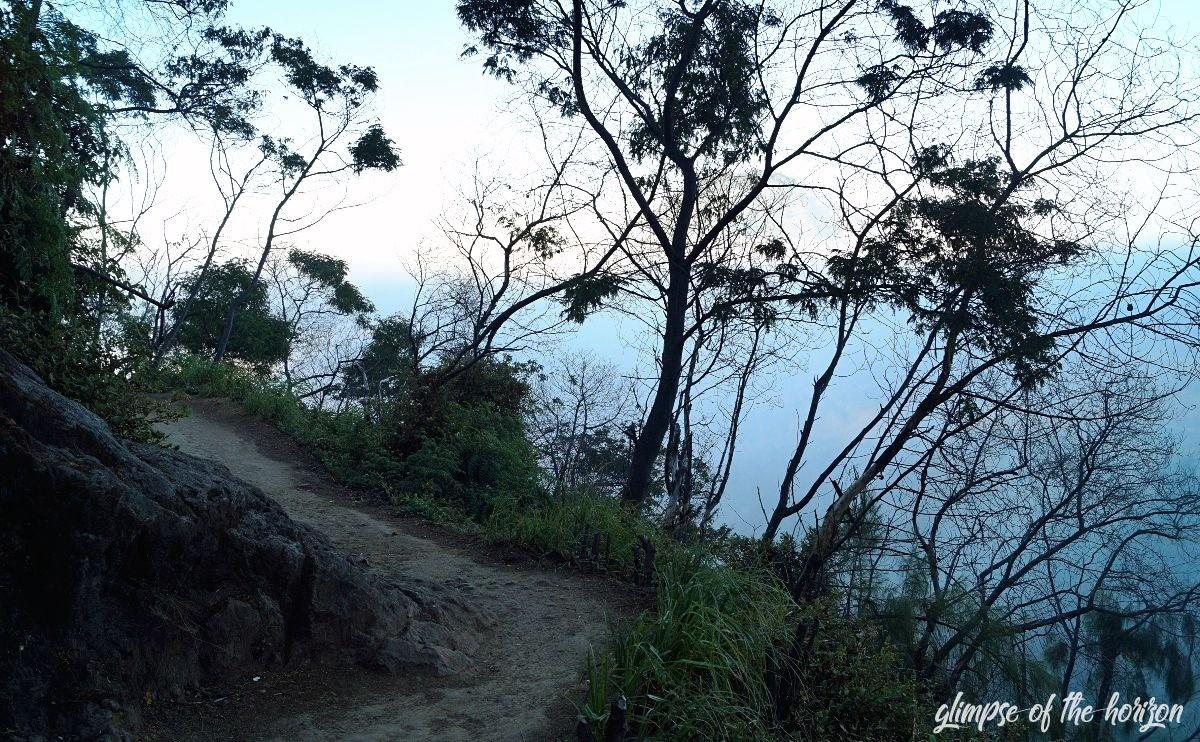 Curiosity triumphed. We were already here, we wanted to go up. Even though we knew we’d have to lose a few weeks of our lives. And so we tightened the mask and climbed up. The fog became thicker and bluer, people on their way back sought eye contact over the masks. How can you leave tourists here? Then why do tourists really come up here? Questions that came and went. 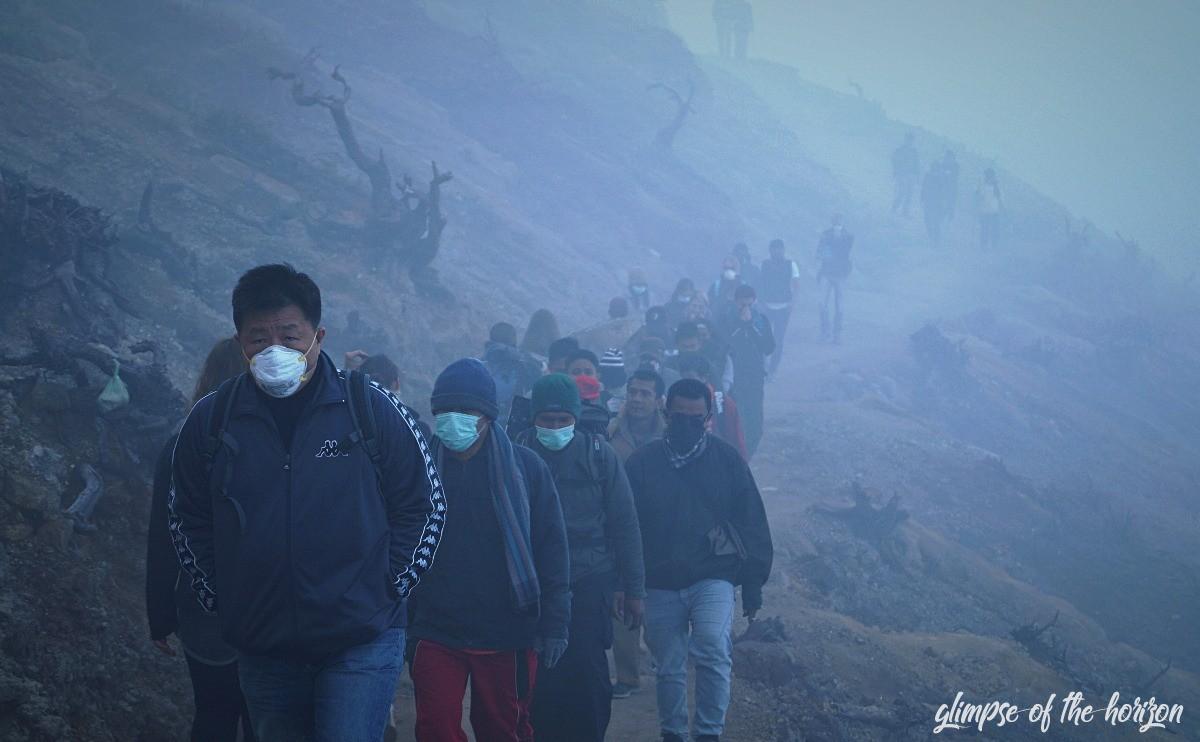 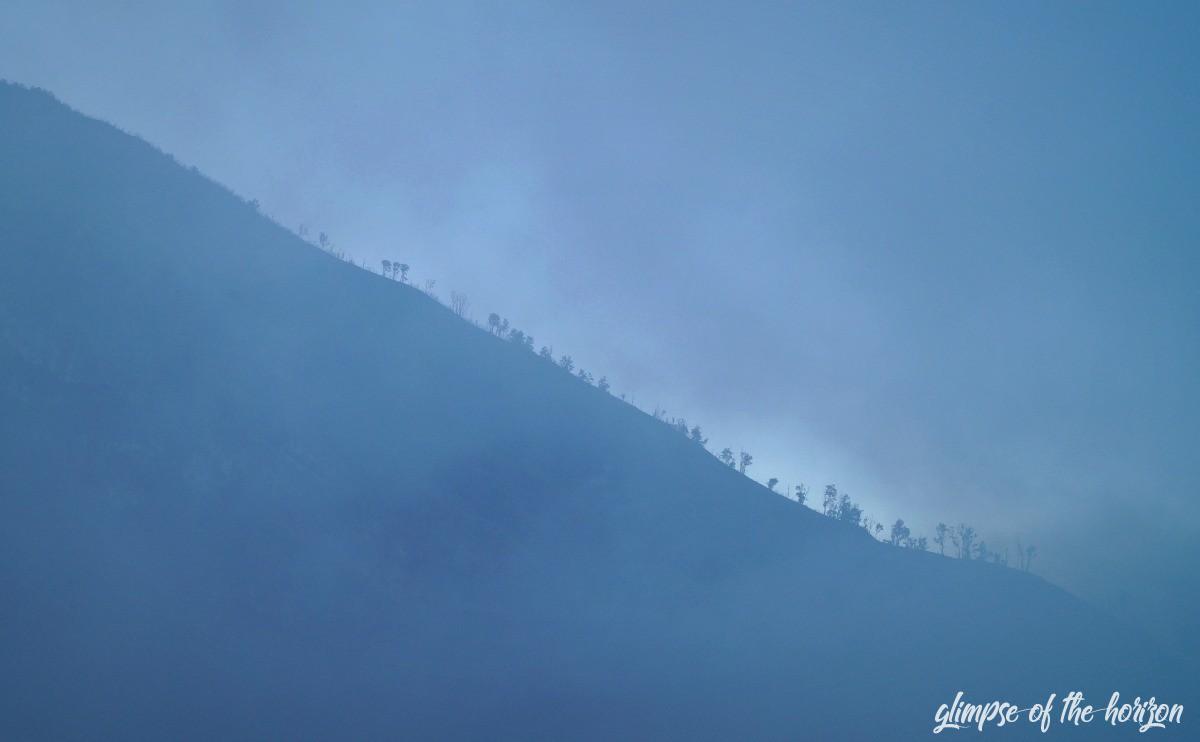 Because then it was done. We had reached the top. Unreal wide landscapes, next to and below us fog. Actually, one would see the huge Acid Lake in the middle of the crater of the volcano from here. But no chance – the sulphur vapours overlaid everything. A small staircase led down to the lake. Countless signs on the summit warned of the danger to life lurking everywhere. A slip on the way down would be certain death. If the impact doesn’t kill you, it’s the toxic lake. 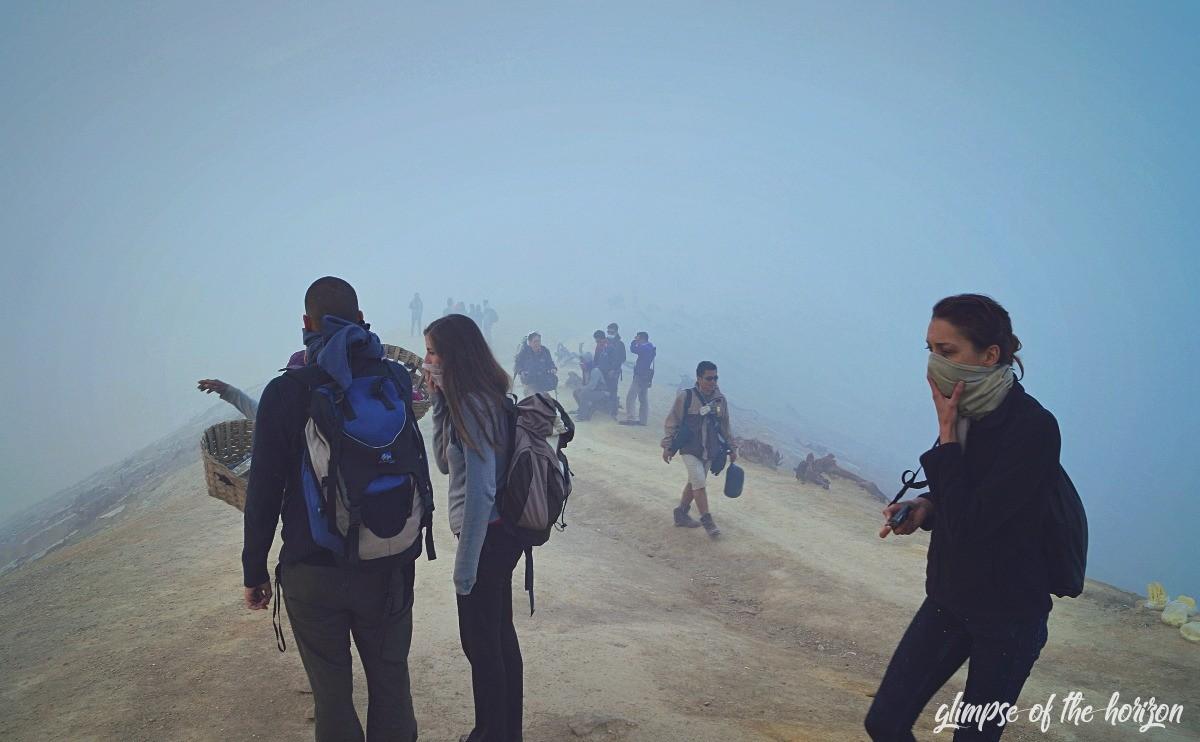 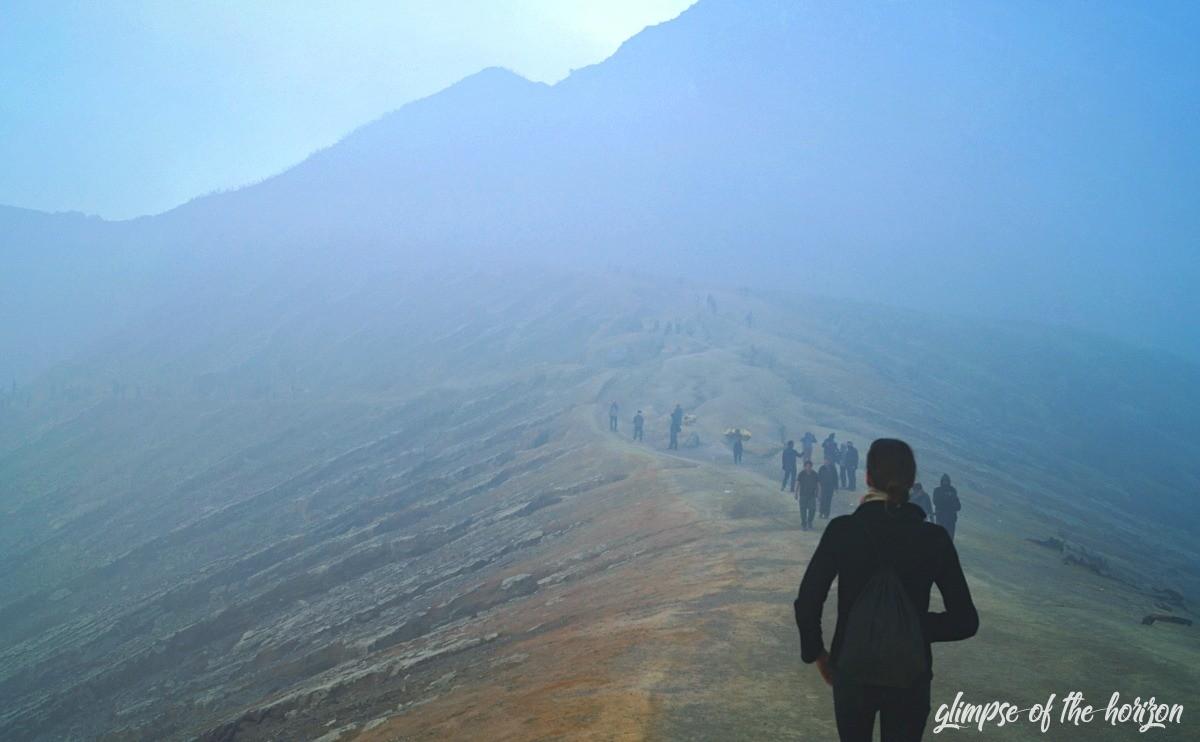 At the end of the stairs was the entrance to the sulphur mine. One to two hours one would be in the underworld of Ijen and get to know the unreal reality of the sulphur miners. All this for a small fee. We decided against it, the way up here and the events up here were really enough impressions for us, which we could process somehow. The clouds in the sky tore open and the sun shone on the blue haze and the yellow chunks of sulphur on the paths. You heard nothing, you tasted nothing, you only smelled sulphur. 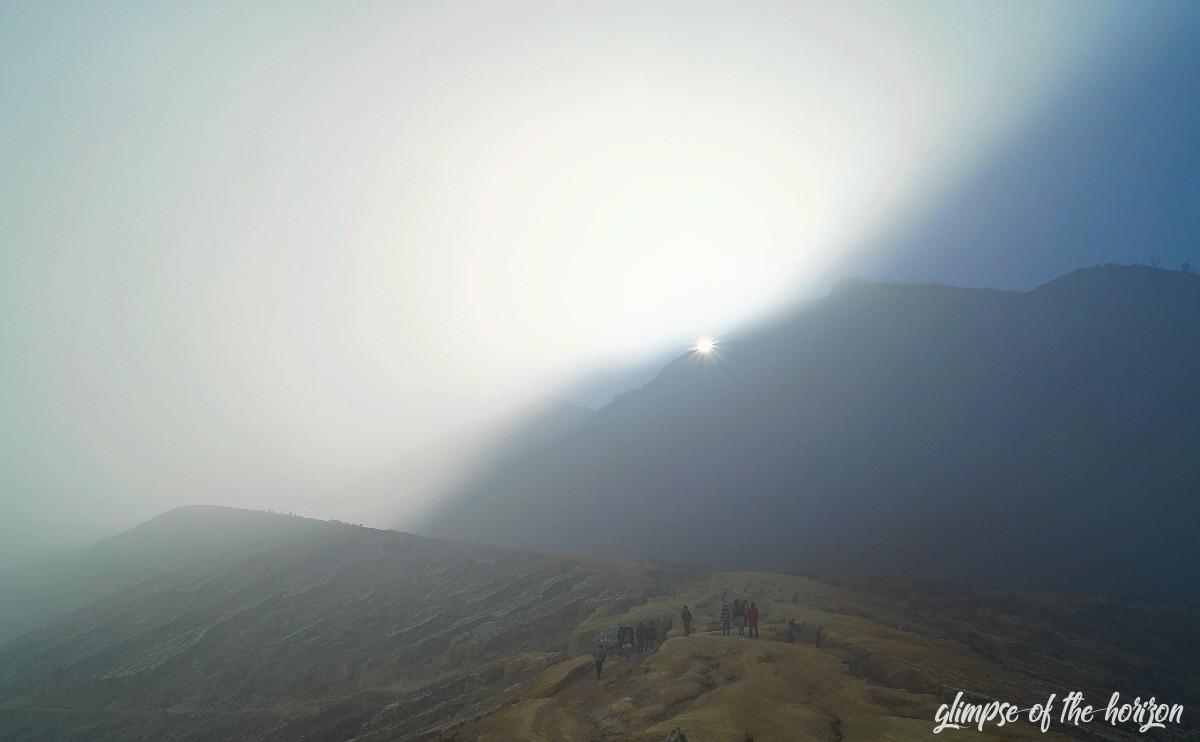 On this day it was not possible to see the lake – the fog walls of the volcano were much too dense. We were happy, unlike the workers, to be allowed to go downhill again. As we walked down, many workers were also on the same path. After a few metres, they always set down their baskets weighing up to 90 kilograms and changed shoulders. Hardly anyone is over six feet tall. Hardly anyone turns 40 years old. But they earn four times as much from a field worker and are highly regarded in the surrounding villages. 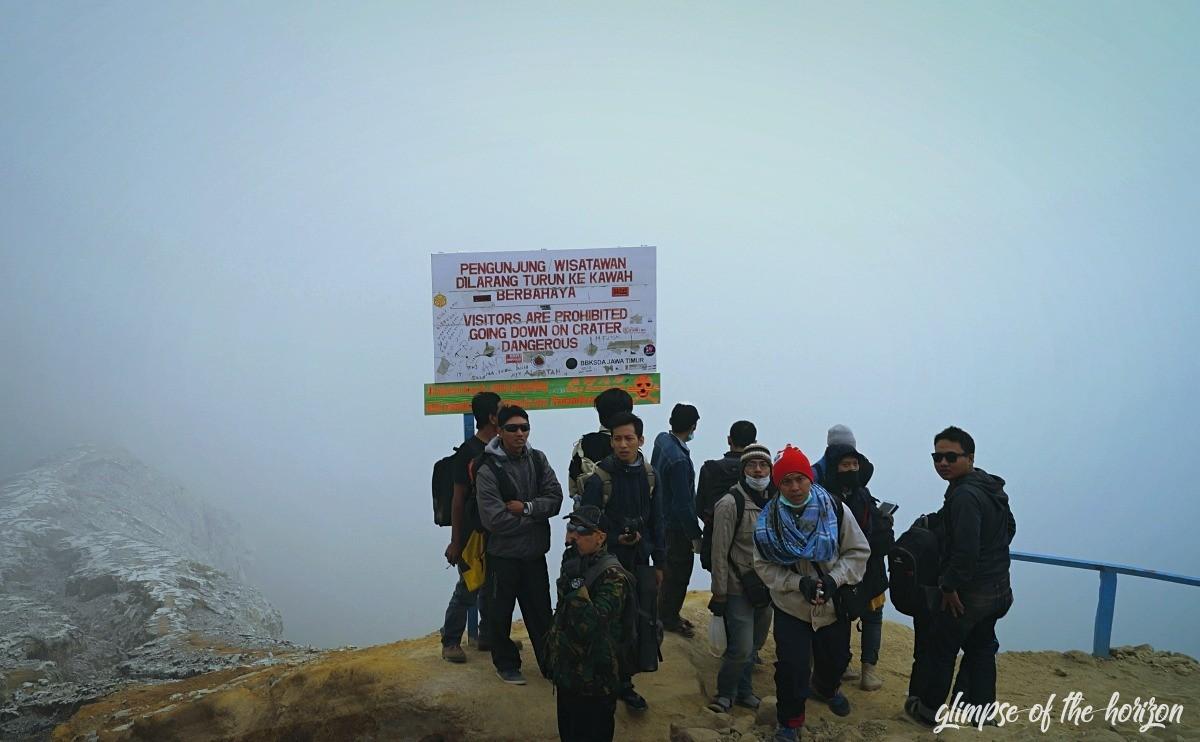 And they were nice. All of them – without exception – spoke with a broken English, asked to take pictures and simply looked good-natured. It was amazing for any of us from the first world to see this. Impressive and at the same time it brought you back to the ground of facts. 70 kilograms brings the equivalent of seven euros. You must not start calculating how long it takes to work in Western countries. And under what circumstances. 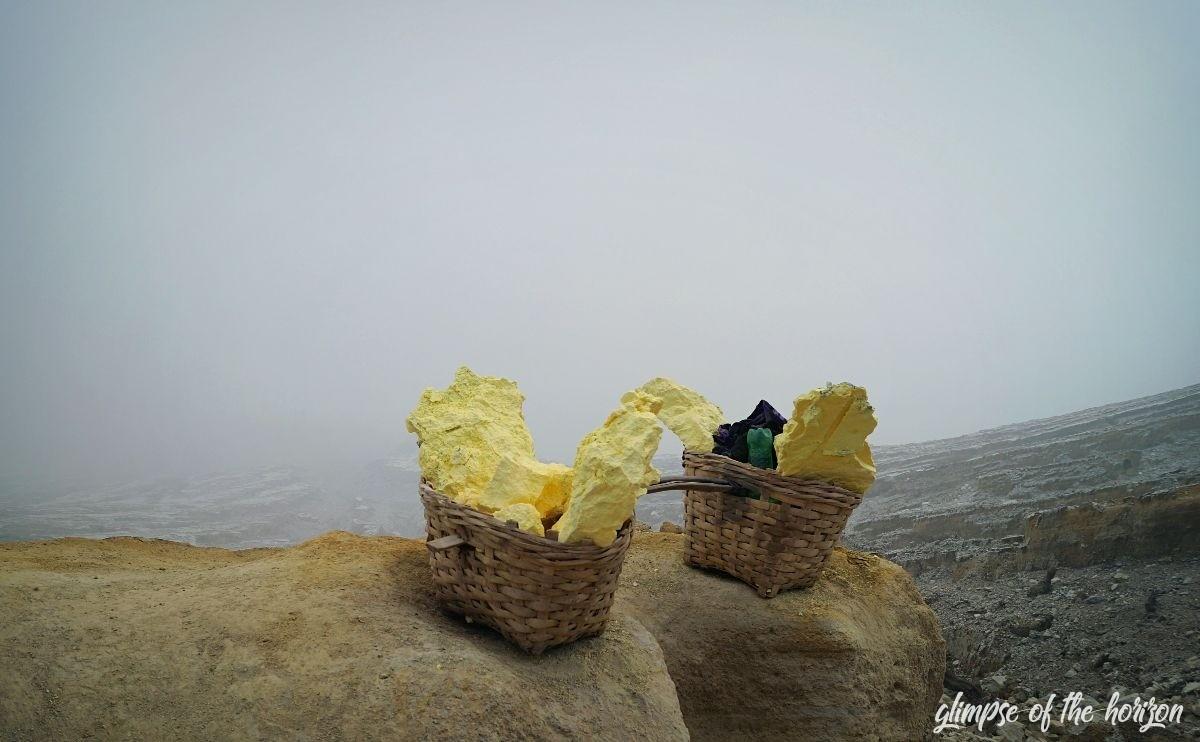 Arrived downstairs they were all very cautious. Hardly any words were exchanged, because everyone still had to classify the impressions. There is such a thing in the world. That’s how people work. That’s how people live. And we got an insight – but we were also very grateful to be able to live in an environment where what we have just experienced should not happen. In our offices, the distance between desk and cabinet must be large enough, otherwise there could be problems with work safety. Here, people inhale sulphur 24 hours a day and carry their double body weight on their shoulders.

It’s not fair. No one said that. And we can’t change it either. But we’ll take it with us for the rest of our lives. To get us on the ground. To be grateful. And to think of the many people who are worse off than you are.